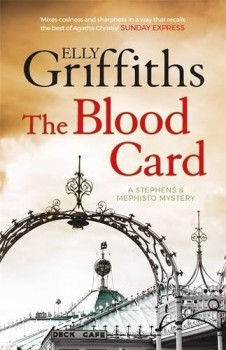 On the eve of the Coronation, DI Edgar Stephens and magician Max Mephisto uncover an anarchist plot while they attempt to find the killer of their wartime commander.

Elly Griffiths made her name with the bestselling Ruth Galloway mysteries. And she has also introduced the unlikely detective pairing of Inspector Edgar Stephens and top-of-the-bill magician Max Mephisto. This is a cosy with teeth, social comment and a wonderful sense of place and the 1950s background. Take her heroes …

Stephens is stereotypically middle class English, always trying to do the right thing. He was injured in the shambles of the Norway invasion, and has joined the police and risen to become DI in the louche seaside resort of Brighton. The older, deliberately theatrical, Mephisto is an aristocrat who abandoned his birthright for a career as a magician. Although an established star, he now faces an uncertain future as variety theatre is shrinking due to the rising popularity of television. The pair met and became friends on war service with a specialist camouflage unit which sought to use the illusions of stage magic to mislead and disrupt the threat of the German bid to dominate Europe.

Far-fetched? In a war where anything to hamper Hitler was considered by the fertile mind of Churchill, remember that the great thriller writer Dennis Wheatley and the future creator of James Bond, Ian Fleming, once served together in the London Controlling Section, a secret unit which, among many other things, fed astrological misinformation to a Nazi hierarchy obsessed with Teutonic myth and the occult!

It’s 1953. A new Elizabethan age is dawning, but as England excitedly prepares for the coronation, Stephens has doubts about the drowning of a Romany fortune teller.
He is summoned to London, where he is reunited with Mephisto, to investigate the murder of their wartime commander, found with the Blood Card, the ace of hearts, on his body and a playbill, featuring another dead member of the Magic Men team in his possession, along with a cryptic crossword.

Mephisto, meanwhile, is rehearsing for a spectacular televised Coronation Day variety show, so when the evidence points to an American connection, it is Stephens who travels to the land of plenty – a world away from the drab and still-rationed England. The man he wants to see, a small-town mesmerist who may hold the key to the London murder, is killed in a hit and run and it is his colleague, DS Emma Holmes, who discovers the link, buried in the files of the fortune teller case, that leads to an anarchist group planning an explosive finale to Coronation Day.

This is an original and lively whodunit, enhanced by some subtle wit, superb characterisation of the lesser players, with fine descriptions of theatrical life and the changing nature of entertainment, matched only by the down-at-heel atmosphere of post-war Brighton. Griffiths has an enviable knack of creating a clever and exciting plot that works on many levels while ensuring the sense of time and place is absolutely right.

Overly PC readers may criticise what they will see as stereotyping of various minorities, but anyone who knows any genuine Romanies of an older generation will applaud her portrayal. The colourful extended Zabini family and their inventive and talented friends carry this story as much as do the protagonists. And Griffiths’ portrayal of American attitudes, particularly those of the police, accurately reflects the times. Always a land of over-simplicity – ‘two legs good, four legs bad’ as one of her characters so graphically puts it – this was the start of the ‘Reds under the bed’ hysteria which led to McCarthyism.

If there is a criticism of what is a fabulous book it could be that the main characters, although more rounded, do not appear to have moved on much emotionally since their last outing. Edgar Stephens is still trying to pin Ruby, Max’s illegitimate daughter, down to a wedding date, while she seems set on pursuing her ambition to become a great stage magician. Meanwhile Emma, otherwise the perfect policewoman, still cannot come to terms with her feelings for Edgar.

Perhaps the personal stuff will work out in the future. In the meantime, read this and enjoy it. If you’re new to the series try the first two stories as well, but don’t worry, this works perfectly as a standalone. Stephens and Mephisto are absolute naturals for a spectacular period TV series!