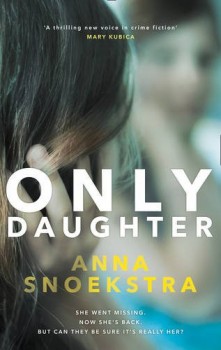 A young woman decides to impersonate Rebecca who went missing some years ago. She resembles her in looks and would have been the same age. Not until she moves in with Rebecca’s family and begins to lead her life does she have any qualms about this course of action. Just how much danger is she in?

A young woman leaves home after an incident with her step-mother and has a miserable time trying to survive. When she is caught shoplifting some food she decides to say that she is in fact another young woman called Rebecca who disappeared from her own home in another part of Australia some years ago. The two girls were uncannily similar in looks at the age at which Rebecca went missing.

The police believe the story and take her back to Rebecca’s home town. Here she eventually begins to settle down with her new, apparently restored family. Only gradually does she begin to discover that all is not what it originally seemed and that her new life is fraught with unexpected danger.

There is a very clever play on time in this novel. In some chapters the imposter is in the present time and speaking with her own voice. In others, the missing girl is in the present time before she went missing and speaking in what would have been her own voice. In yet others the imposter is living Rebecca’s life, spending time with her family and her friends (now older of course) but reflecting on what it must have been like for Rebecca. Additionally, she is portrayed remembering incidents that took place during her own childhood when she was growing up with her real family.

It is not always obvious which is which, forcing the reader to stop and think, thus ensuring a high level of engagement. Indeed, there is no stage in the book in which the need for concentration lets up. This is despite the sometimes miserable descriptions of the girls’ lives, working in a burger bar, hanging out with so-called friends, and putting up with friends’ parents.  The description of the cleaning work in the greasy environment of the burger bar in a hot climate too, are particularly vivid – as is the description of the imposter’s life before her change of circumstance.

The character of the imposter has a great deal of depth: the way she plans her deception and consciously manipulates people to ensure that she is not found out; the way she worries about the small differences that people might notice; and the way she observes people and adapts her behaviour so that they don’t suspect her deception. She comes over as very clever and strong and yet strangely vulnerable – someone who is able to act a role convincingly but yet who feels the fear of exposure. It is a very perceptive portrayal of the character. Other characters are believable too, often more being said about them through omission rather than description.

Overall this is an unusual story that explores ways in which people can be affected by their expectations.