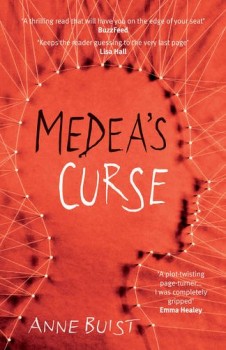 When Natalie receives the first note, she drops it in the bin. But with each new increasingly threatening message, she starts to fear for her safety.

Dr Natalie King, an Australian forensic psychiatrist, has her hands full with her client list. Her patients, mainly victims and criminals of violent family crimes, do not make it easy to stay detached. Lucky that she has the band she sings with and her Ducati motorbike to distract her, and her meds to keep her grounded.

But her luck is about to change and her professional detachment tested to the maximum, when public prosecutor Liam O’Shea dangles temptation under her nose. She can’t ignore the chance to get Amber Hardy, a former patient who should never have been incarcerated, out of prison. Neither can she ignore the chemistry between her and Liam, a married man.

Then the first note arrives. She sees it as a professional hazard, and throws it in the bin. But when the second one arrives, she senses the threat; someone is stalking her. She doesn’t know whether it’s an angry former patient, someone on the periphery of her current patient list or Liam’s wife,

Medea’s Curse is a crime story with a psychiatrist protagonist, written by a psychiatrist. That alone had me itching to read this book. And boy, did it deliver. This was no well-researched tale. It was written from the point of true experience. Yes, there were times where the depth of information was perhaps more than some readers would need, but it scratched well beneath the surface and was, for that, satisfying.

Written in the third person, it stays with Natalie from the start to the finish. What keeps the story moving forward is the various strands of her life: her cases, her evening job as a singer in a local band, her home life, her evolving sex-life with Liam, and the stalker. Unfortunately, I felt this aspect was overplayed. There were so many characters in the story that at times I struggled to remember who each one was, and how they impacted the plot.

Following three then four of Natalie’s case-loads increased the possible number of suspects. But this was exponential and confusing once all the patients’ family members and other hangers-on took their turn on the stage. Add to that the similarities in some of the names, the plethora of characters was, at times, frustrating. Some had such small roles they could have been scrapped, and their actions given to other characters. Others were unnecessary red-herrings in an already satisfyingly complex plot.

The number of characters intruded heavily, and although I thoroughly enjoyed Natalie’s moments with her patients, I never truly immersed myself in the story. I felt like I’d turned up expecting a dinner amongst friends, only to open the door on a party where the whole town had been invited. And I was expected to remember everyone. Worse still, although I think it was partly done to hide the various criminals until the end, none of their identities or motives were surprising. Of course, in real life most of us have contact with many people in the average day. But for clarity, authors should pare this back to the essential.

That said, for a debut novel, Medea’s Curse stands out. It is rich, and has enough of the page-turner factor. It did not have me on the edge of my seat, because although there was no sacrifice to my suspension of disbelief, the sheer number of ‘emotionally-damaged’ characters desensitised me.

However, despite its character overload, the plot did hold my attention. The loose ends were well tied, if slightly hurriedly at the end, but I sense we will be meeting Dr Natalie King again.