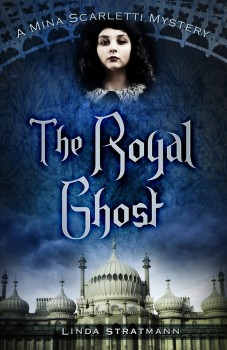 A scandalous booklet attracts the attention of spiritualist Arthur Wallace Hope – and also young Mina Scarletti, a writer of horror stories and investigator of psychic phenomena, who suspects fraud.

Mina Scarletti is a detective, the kind of which you won’t have met before. She’s young, aggressively intelligent, a successful author of horror stories – and very noticeably physically handicapped. Since the age of 15, she has suffered from scoliosis, even today a still largely unexplained condition.

Her spine has a sideways curve, which could increase. The problem most commonly affects those between the ages of ten and 20, and girls more severely than boys. Severe cases can interfere with breathing, produce back pain, rib or shoulder blade prominence and uneven hip, arms or leg lengths. In early Victorian times, there was little or no treatment and scoliosis was thought to dramatically limit life span.

Given Mina’s disability, violence and much physical action are clearly out. But it does allow her creator, a former chemist’s dispenser, to indulge in an obsession which has already sparked several factual books – the depredations of clever and ruthless fraudsters and conmen.

Set in Brighton in the 1870s, Mina’s second adventure again draws on the Victorian middle class obsession with spiritualism – and the ability of criminals to exploit it. The ladies of Brighton’s monied and chattering social upper class are all talking about a booklet which has taken the town by storm. It’s written by two sisters who claim they saw the ghosts of George IV as Prince Regent and his mistress, possibly his morganatic wife, Mrs Fitzherbert, in what, in genteel Victorian terms, could be described as a series of compromising situations during a visit to the Royal Pavilion.

Mina is also visited by spiritualist Arthur Wallace Hope. He is keen to get her to withdraw her evidence against a false medium, who is now awaiting trial as a result of Mina’s earlier adventure. Hope, who has laid aside his Viscountcy to campaign for the cause he believes in – a nice modern touch, think of Viscount Stansgate (Tony Benn) or the Earl of Home (Alec Douglas-Home) – becomes very popular in pretentious Brighton society, but Mina dislikes both his obsession and the way he tries to blackmail her into retracting her evidence. Sensing that something is wrong, she sets out to outwit him – and at the same time discover the truth behind the publication of the scandalous booklet.

This beautifully written mystery tale could be glibly summed up as Jane Austin meets a female Perry Mason. The historical background is evocative and brings middle class Victorian Brighton, with all its gullibility, gossip, backbiting, social climbing and pretensions, to life, often with a wry sense of humour.

Mina is a more than believable protagonist, pragmatic and resourceful and while realising her limitations, determined not to let her disability stop her doing things she wants to. The supporting characters are also well-rounded and contribute effectively to the whole.

It may be ungenerous to cavil, but I wonder a little about her collaborators, Doctor Daniel Hamid and his sister. Indian medical degrees were not recognised until 1892 – and the fledgling and frequently reactionary General Medical Council might have had plenty to say about even an Anglo-Indian practising in an English seaside town. Stratman bypasses this by having them run what in modern terms would be a health clinic with a gym and massage centre. But it still leaves the question would Brighton’s snobbish and superior British ladies allow themselves to be treated by a colonial?

Such a minor point should not distract from what is a clever, well thought out and superbly constructed mystery. Mina Scarletti is here to stay and fans, myself included, will look forward to her next joust with the smarter end of the criminal underworld.