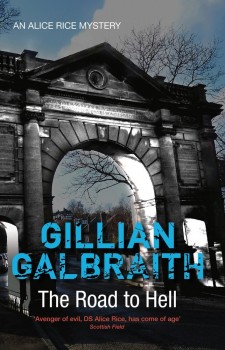 The Road to Hell

A body of a half-naked woman is discovered in a park in Edinburgh. It looks like murder, and when a second body is found, also unclothed, DS Alice Rice wonders if the two cases are connected.

When the body of a half-naked woman is found in a park in Edinburgh, the natural conclusion is that this is a suspicious death, although apart from some scrapes and scratches caused as she apparently tried to burrow her way into the ground, there’s nothing to say for certain that she’s been murdered. But then when a second body is found, this time that of a vicar, discovered naked in his own garden, DS Alice Peck is convinced that she might have a killer on her hands, even though there’s nothing on the face of it to link the two deaths.

DS Alice Peck is clearly a woman with a lot of her plate at the start of this book. Her career is potentially in ruins as she faces a disciplinary charge. She’s accused of passing on information about a suspected paedophile in a way that led to his death. She’s innocent, but doesn’t have much faith in the system to reach the right conclusion. Although I was coming new to the series, it was relatively easy to get a grip on the characters and the background, helped by reasonably well-seeded snippets rather than too much in the way of information dumps.

Peck soon finds that her life is capable of going to hell in a number of unexpected ways, but she does a good job of holding herself together in some pretty unfortunate circumstances, preferring to immerse herself in her work rather than fall to pieces. One of the strengths of this book is in its depiction of the minor characters, particularly the inhabitants of the city’s homeless shelters and those who run them.

I was somewhat underwhelmed by the conclusion, which seemed to have a ‘home in time for tea’ sort of feeling to the wrapping up, but it’s worth remembering that The Road to Hell is billed as a mystery, which perhaps makes some degree of misdirection excusable. This certainly doesn’t fall into the category of tartan noir, but it’s a competent tale reasonably well told.