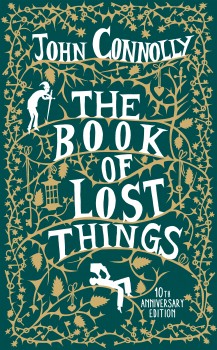 In 1930s Britain, a young boy, David, has his life shattered when his mother dies after suffering for some time with cancer. His father remarries and they move to a large and marvellous house, outside London. David has a room in the attic, lined with books, which talk to him! The arrival of a new baby coincides with the arrival of a sinister and shadowy figure, the Crooked Man.

As a German fighter plane crashes into the garden, David becomes lost in a crack in the garden and finds himself in another world, a world populated with figures which echo the characters of fairy tales but with much more sinister twists and traits.

David is stalked by creatures that are half wolf and half man, and helped by the Woodman and an ambiguous knight, he travels to the castle of the king who has The Book of Lost Things, in the hope that it will help him to return to home. His journey is dogged by the manipulations of the omnipresent Crooked Man and marked by major conflicts against beasts and robbers.

This book is delightful. It has the classic elements of a journey story, over-ridden with the rites of passage from childhood to adulthood. The intertwining of the familiar characters of nursery tales with significantly adult themes and longings emphasise the rite of passage and illustrate the integrity with which the character of David develops.

John Connolly has written this novel beautifully. His belief in the power of books and of reading are a strong theme throughout. The characters are enigmatic, yet deep and believable. At times, there are short phrases, or paragraphs, which made me stop and re-read them, considering them carefully at the same time as waiting for the tingling in my eyes and the lump in my throat to subside.

This copy of the book is the tenth anniversary edition of a novel which is surely a modern classic. I will read it again and again.