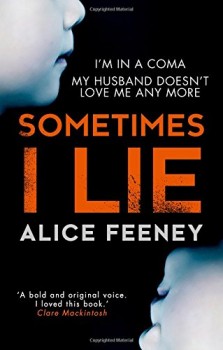 She can hear every word. She knows she is in danger. There is nothing she can do.

She doesn’t recognise her surroundings. Worse still, she is awake but unable to open her eyes, let alone speak. Gradually, Amber Reynolds realises she is in a coma after a serious accident. A few days earlier, a week before Christmas, she was ‘Amber from Coffee Morning’, a radio chat show. A few days earlier she was a married woman with questions about her husband’s fidelity. A few days before, she was a sister with concerns about her sibling. But as her memory begins to return of the days leading up to her accident, she becomes increasingly certain her husband doesn’t love her and that he played a part in her ‘accident’. Maybe her sister too. There is nothing she can do; she is still in a coma.

Speaking from experience, I know that there are moments of awareness when in a coma. So, I was intrigued to read Sometimes I Lie, but, with my cynical hat on, expecting it to be poorly researched and unrealistic. Nothing could be further from the truth. Feeney has managed to weave in Amber’s periods of locked-in lucidity in a believable way. She dedicates chapters to now (in the hospital) in the present tense and then (before her accident) in the past tense, and all in the first person point of view, unfolding the plot in an intimate and teasing manner. Feeney cleverly works in a huge amount of backstory by interspersing these main chapters with excerpts from a diary from many years before, when Amber and her sister were not even teenagers. These ‘before’ chapters are brilliantly disturbing and add to the suspense. Moreover, the author has captured an authentic voice of a child, along with all those childish thoughts and angsts.

I found some of the foreshadowing a little obvious, and guessed the culprit early on. But I so enjoyed the straightforward writing style and psychologically thrilling layers of story that it did not occur to me to stop reading. This fast-paced book, with its unreliable narrator, oozes dark, sinister and deceitful, and has more twists than an out-of-control bramble bush. And even though I was certain whodunit, I found myself questioning each of the characters who came into Amber’s hospital room. They all raised suspicions and I sensed her fear of each of them from her claustrophobic, vulnerable position. Then came the final twist. Right at the end, and just when I thought I had it all sorted, the hugest curve-ball smacked me. It turned the whole of the story on its head, and messed with mine!

The characters are flawed, and invoke a full range of emotions from loving them to hating them, Amber included. The main character warns us from the start that she lies sometimes, and the reader would be advised to remember that. But this is not your run-of-the-mill unreliable narrator. I really don’t want to reveal any more; to do so would spoil an outstanding story.

It is rare that a book stays with me after I have closed it. Sometimes I Lie has joined that elite club, and Feeney, as a debut author, has seriously impressed this hard-to-please reader. I see this as a film, but in the meantime, I hope Feeney has more thrillers up her sleeve.