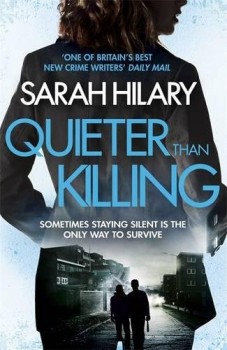 While DI Marnie Rome and DS Noah Jake investigate a seemingly random series of violent attacks in London, Marnie also has to come face to face with the demons from her own past.

DI Marnie Rome and DS Noah Jake are investigating a series of vicious, random attacks on seemingly unconnected victims. But a little digging by the pair uncovers a possible connection. All those attacked have previously been aggressors themselves and it soon looks like a vigilante is dishing out their own brand of justice on the cold streets of London.

This is the fourth in Sarah Hilary’s Marnie Rome series, and Marnie’s story is starting to unfold gradually. In Quieter Than Killing, her family home, now rented out, is ransacked and Marnie is forced to confront her past: the violent death of her parents six years ago at the hands of the boy they took in and fostered, but who subsequently turned against them in a frenzied knife murder.

Stephen Keele is in prison for the murder, but Marnie has never been able to sever her ties with him. She needs the truth about her parents’ death and only Stephen can provide that. He may also hold the key to the burglary and to the theft of a small box of personal items that Marnie had hidden in the attic.

Running through the book is the story of Finn, a young boy held prisoner by a nameless man who treats him like a slave. Finn knows the man as Brady, but he doesn’t know why he’s being held, he only knows that he has to stay strong so that his father will be proud of him when he finally escapes captivity. Finn’s scenes are knife-sharp and painful, and his captivity is raw and almost without hope. You know with Sarah Hilary that no one is safe and that there is no guarantee of a happy ending, but it’s impossible not to want that for him.

Hilary’s writing is as elegant and incisive as her plotting. Her characters are well-drawn but never served up on a plate to be devoured all at once, and four books into the series, they are still developing. It’s as well to remember that in her books everything is not always as it seems on the surface but, even armed with that knowledge, she always manages to stay one step ahead of my guesses.

In Quieter Than Killing, we come closer to the possible truth about the death of Marnie’s parents, but the answers are still being dangled tantalisingly out of reach and it’s impossible not to distrust Stephen Keele. He might be telling the truth, but then again, he might be stringing Marnie – and the reader – along for his own entertainment. As a sub-plot, this hasn’t yet run its course, but I’m intrigued to see where Hilary takes her characters when she does decide to wind up Stephen’s story.

This is a clever, classy police series which amply demonstrates the ever-developing strength and quality of Hilary’s writing. Quieter Than Killing can be read as a standalone, but if you do come late to this particular party, you’ll find a feast in store for you with the rest of the series.