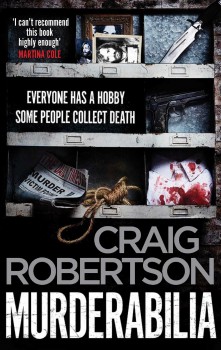 The son of a prominent MSP is murdered and hung from a bridge in full view of a train load of commuters. Despite being officially off the case and at home on sick leave, DI Rachel Narey is determined to uncover the identity of the killer.

An early train is on its way out of Queen Street station in Glasgow but a shock is in store for the commuters as a naked body is seen hanging from a bridge. The horrific tableau is captured on phone and cameras and the images soon go viral on the internet.

But one photo that captures the imagination and hits the newspaper front pages – the photo of a neat pile of clothes on the ground, overlain by the shadow of the man’s body. Former crime scene photographer-turned-photo journalist Tony Winter took the photo, which attracts both praise and censure in equal measure.

It’s immediately apparent that the man has been murdered and when he turns out to be the son of a prominent member of the Scottish parliament, the press are all over the case like a rash, but one thing isn’t made known: the man’s socks and underwear were missing from the neatly-folded clothes.

Aiden McAlpine’s death is high-profile and although Winter’s partner, DI Rachel Narey, wants to be assigned to the case, it goes to DCI Denny Kelbie, a man for whom she has no respect. But when a row over the appointment gets out of hand, Narey collapses and the news is soon out that she’s pregnant and, worse, found to be suffering from pre-eclampsia. She ends up at home, confined to bed, and ordered to do nothing more strenuous than reading and watching TV. She’s very definitely off the case.

The question both Winter and Narey want to see answered is what happened to the dead man’s missing clothes. Their search leads Narey into the darkest corners of the internet and the trade in items belonging to murderers and their victims. Although it’s been forced underground since 2001 when eBay banned the sale of ‘murderabilia’ as it’s known, the sale of such things is still flourishing, with the choicest items for sale on the so-called dark web. Narey is soon sucked into the clandestine world of murderabilia dealers, while Winter follows other leads.

Murderabilia is one of the few books to have given me nightmares, but in my case it wasn’t the murders that lurked in my mind. Instead, I ended up dreaming that I collapsed at work with pre-eclampsia! Craig Robertson creates an interesting scenario here by seemingly side-lining half of his main team, but it works well as this plot device enables Narey to follow her instincts and immerse herself in the murky world of killers and those fascinated by them. In particular, she becomes drawn to the horrific murder of Sharon Tate along with her unborn baby and four others in Hollywood in 1969. She also sees ties to a cold case from years ago, the unsolved disappearance of schoolboy Martin Welsh, who vanished without trace.

Narey is dogged in her determination to find McAlpine’s killer. Winter is concerned for her and her baby, but she has no intention of stopping. Robertson takes an interesting premise and runs with it very successfully. The killer is known to the readers from the outset, but despite that, there is a very palpable tension hanging over the book as Narey delves ever deeper into the darkest corners of the internet. The two strands of the story are expertly woven together and I was hooked from beginning to end. This is a stylish police thriller with a killer ending.