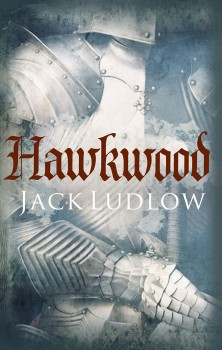 After the two great battles of the 100 Years War, newly-knighted Sir John Hawkwood, hoping to make his fortune, joins a mercenary band.

Jack Ludlow, who produced the 18th century John Pearce naval series under his own name David Donachie, used his pen-name on several series based in the Roman Republican era. He has progressed through the Crusades to the 100 Years War, that long, on-off, but always bitter, struggle of the Plantagenet English kings to establish their right as rulers of France.

This story of John Hawkwood, the 14th century mercenary commander, at one time the single most important man in an Italy split into warring city states, and considered by some military historians the greatest tactical commander since Caesar, is a semi-biography – in as much as his story is known. After the two great battles of the 100 Years War, newly-knighted Sir John Hawkwood, hoping to make his fortune, joins a mercenary band. After besieging the Papal City of Avignon, Hawkwood moves on to Italy and more battles with rival mercenaries, powerful city states and more than one Pope.

Ludlow’s approach is much like that of Eric Morecambe to playing the piano. Criticised by the conductor Andre Previn, Morecambe told him: “I am playing all the right notes, but not necessarily in the right order!” For notes, substitute names, places, dates, characters and actions. What serious historians like Willam Caferro, Frances Stonor Saunders or even Hawkwood’s contemporary, the Flemish chronicler Jean Froissart, would make of this elided and at times inaccurate version is anyone’s guess. I was also amused by the reference in the prologue to Hawkwood being “daubed” a knight by the Prince of Wales. This raises a rather splendid mental picture of Edward of Woodstock, brush in hand, solemnly coating the new Sir John with paint!

I admit to bias. I’ve spent almost 15 years researching Hawkwood in England, France and Italy. But Ludlow’s book is not meant to be history. It’s more a fast-moving adventure story of a clever, careful, patriotic, and at times brutal man who rose to the top and remained there in an age renowned for its brutality and betrayals.

While the salient facts, such as the capture of the town of Pont-St-Esprit and the subsequent blackmailing of the Pope at Avignon, are largely accurate, the necessary compression of more than 30 years of slaughter and rapine across much of Italy makes the storyline quite stilted and jerky in places.  Hawkwood’s first wife, of whom little is known, is conveniently killed off in childbirth early on – and some of the key characters remain under-developed and either shifted like the German mercenary Albert Sterz or the Papal legate Cardinal Gil Albornoz in the timeframe and the roles they actually played.

While readers may be disappointed with the historical side, the action is often exciting and Ludlow’s assessment of the sheer stupidity, venality and self-delusion of the continent’s ruling classes – particularly those of the Catholic church – is at times scathing.