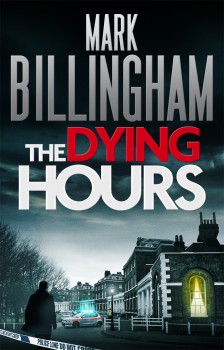 Tom Thorne, now busted back into uniform, is convinced that there’s more to a cluster of deaths among the elderly than simply suicides. But he’s the only one who wants to investigate further.

After his unorthodox behaviour in GOOD AS DEAD, Tom Thorne is back in uniform and hating it, finding himself sidelined by his superiors and ignored by the Murder Investigation Team when he tries to convince them that there is more to a series of suicides amongst the elderly than meets the eye. Their deaths have been dismissed as routine and no one apart from Thorne wants to bother to investigate further.

But the deaths continue and Thorne spots a connection between them, linking back to a long-forgotten trial 30 years ago that is now coming back to haunt all those involved. Thorne has no qualms about enlisting the help of others, even though their involvement could put the careers of fellow officers Dave Holland and Yvonne Kitson in jeapordy. But it’s not just careers that end up at stake. Lives go on the line as well.

I first encountered Thorne in the previous book, quite late on in the series, but lack of prior knowledge didn’t prove a hindrance, and the same is true here. THE DYING HOURS can easily be read as a standalone – it does not give away much detail of Thorne’s fall from grace and the characters come reasonably freshly to the page, despite a considerable backstory. Hints are dropped but not too heavily. Thorne himself is out of the usual mould: he has a troubled past, a relationship that he seems to be hanging onto by the skin of his teeth even though, in theory, his partner Helen Weeks, also a police officer, should understand the pressures of the job better than most.

The book follows a format that now seems to be ubiquitous so far as crime novels are concerned, interweaving chapters in the present tense – often as here, from the perspective of the villain of the piece – with others in the past tense. As the identity of the killer becomes clear, Thorne is caught up in a race to reach the intended victims before they too are forced into killing themselves, and the horrors they have each faced in the final moments is strongly conveyed but without too much grisly detail.

Mark Billingham delivers a solid serial killer yarn, with a believable main character and a suitably chilling set of murders. He also no longer falls into the trap that I complained about in GOOD AS DEAD of referring to female officers as WPCs, which is a distinct improvement. My strong impression by the end of the book is that there’s plenty of life still left in Thorne as a character, and I’d like to know if he does manage to claw his way out of the uniform that currently feels like a straightjacket, even though it does provide plenty of conflict, both internal and external.