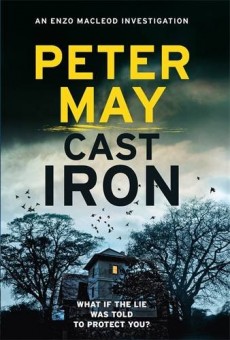 Forensic expert,Enzo Macleod is reviewing the murder of a 20-year old girl, another French cold case that stretches back half a lifetime.

In 1989, Lucie Martin disappeared from near her home in the west of France. Although her body was not found, it looked like Regis Blanc, a pimp given life for killing three prostitutes, was involved.

In 2003, during a heatwave, her remains are found in the bed of a dried-out lake. There’s still no killer, although Lucie’s father and many of those involved with the case are still convinced of Blanc’s guilt.

Now forensic expert Enzo Macleod, on his continuing bet to solve seven French cold cases, is digging into the evidence. But the moment he exposes an error in the original investigation and gets closer to solving the case, the closer danger comes to him and everyone he loves.

Once again, I found myself the latecomer to the party. This was my first dip into the Enzo series, but as a French resident, I was looking forward to the backdrop to this get-together. It didn’t take me long to work out why Enzo fitted in so well in France; with the English stereotyping Frenchmen as regular Casanovas, where else would a man with so many exes and children hanging around want to set down his roots?

Written in the third person, most of the chapters follow Enzo. However, when one of his daughters, Sophie, and her boyfriend are kidnapped, there are several chapters devoted to them. Perhaps too many. And that was my overall impression of this book.

It was a story stretched so long, the elastic was at breaking point. Pages of purple prose, Latinate words and unnecessary stuffing that slowed the pace. Character description that had no bearing on the plot. And as for the ongoing history and geography lessons; paragraph after paragraph of facts about France without intrigue or suspense. For me, those ‘lessons’ did nothing to draw me into the milieu, they simply sounded like an author saying, ‘look how well I know France.’ Unfortunately, because of the above, I stayed distanced from the characters, and never got to the stage where I particularly cared about them.

Now to medical detail. Without embarking on a long-winded lecture, accessing the jugular venous pulse is one of the most difficult to master. Suffice to say, it is done visually. The layman who finds one of the kidnap victims simply would not ‘feel’ it. While this is a small detail in a long story, as the protagonist is a forensic expert, it made me question the rest of the medical facts. That said, I felt there was little in the way of ‘forensic petits-fours’ at this party. It was more Enzo roping the whole of his entourage in to help solve the case.

I am sure it would have been easier to grasp Enzo’s complex family life if I had read the earlier books in this series. At the start, I had to flick back to double-check who was who. But it is possible to read this as a standalone story, and although the end is slightly rushed, the conclusion is satisfying.

There are plenty of twists, and the plot is reasonably intriguing, but there are a few ‘conveniences’. If the style of writing pleases the reader, and is indicative of the other books in this series, then it is a good story that goes beyond just solving a cold case.