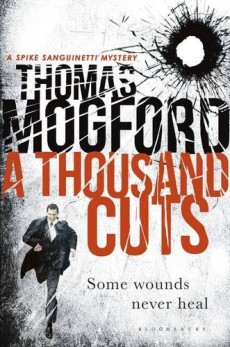 Spike Sanguinetti acts for a man accused of assault and finds links to wartime events which even now remain mysterious, with connections to people he knows well.

Spike Sanguinetti and his partner Peter run a small law firm in Gibraltar; Peter is keen to attract lucrative corporate work but Spike still does the odd criminal case. He is asked to defend Massetti, a man in court on assault charges. The accusation is withdrawn, but when a few days later the alcoholic Massetti is discharged from hospital, it seems Spike is the only one available to see him home.

While there, he finds newspaper cuttings relating to Massetti’s father, executed in 1940 following sabotage at the dockyard in which two British naval officers were killed. Those behind the action saw themselves as making ‘Mil Cortes’, a thousand cuts, small acts of resistance to British domination. Two people somehow involved with the group are well-known to Spike: Marcela, a local restaurant owner, and Sir Anthony Stanford-Trench, who acted as a surrogate father to Spike and whose son Drew was a childhood friend.

Spike does more research but has only partially uncovered the history when a series of shocking deaths suggest that someone is trying to eliminate anyone left alive from the time of the dockyard sabotage. Massetti is the obvious culprit, but CCTV shows him crossing the border to Spain, giving him an alibi. A diary anonymously sent to Spike suggests another with much to conceal: Sir Anthony. Spike has some difficult choices to make.

This, the fifth adventure for Sanguinetti, takes place entirely within Gibraltar. The Rock continues to appeal as a backdrop for events; a unique and exotic mix of races, language and culture with a substantial dollop of prosaic England thrown in. Spike as usual finds it difficult to resist the appeals made to his good nature, and gets into a good deal of trouble, but has the right stuff to carry him through. He comes across as a man with perhaps too much of a conscience for his own good.

Spike starts the book living in a poky flat with his eccentric father Rufus, his policewoman fiancée Jessica, and their adopted son Charlie. Jessica is pregnant and home life is as good as it gets for Spike, although they need larger accommodation - nothing they look at feels suitable - and he seems to carry a permanent sense of guilt about the lack of time he spends with his family.

As with previous books in the series, Thomas Mogford blends a number of plot lines together to make a book full of action. Spike’s unravelling of the wartime story, his cynicism about Drew and his political ambitions, his suspicions about his business partner and his concerns about his family are all woven into a compelling tale. The tension builds steadily to a great climax, making it very difficult to put down.