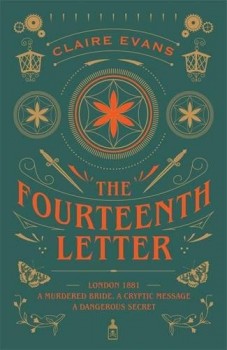 A girl is murdered at her engagement party. William Lamb must keep a deadly secret and deliver a cryptic message, but finds a morass of madness, crime and murder.

No-one can accuse TV production executive Claire Evans of not being ambitious with her writing debut – a massive saga of Victorian horror, detection and adventure melded with ancient madness and future destruction! It’s got more than a touch of the Dan Browns with a good slice of Kate Mosse also in the mix.

This clever adaption of fact and fiction is a book which demands your attention. From a slow, but nevertheless gripping start – it takes more than 20 chapters to establish the background to what eventually builds to a shattering conclusion – it will repay your patience over and again.

With an effective four totally unrelated protagonists – a wimpish and slightly disabled solicitor’s clerk, an ageing detective shunned by his colleagues for his involvement in exposing police corruption, a determined girl from a family of soldiers in the Borders and a half Navaho female crook on the run from American law, sorting out all this background and establishing relationships takes time.

A beautiful young girl is knifed to death at her own engagement party to the son of a wealthy and influential family of industrialists by a naked man bearing a strange insignia cut into his body. Before he flees the horrified gathering, the killer tells her groom-to- be: ‘I promised I would save you.’

The case is assigned to Scotland Yard detective Harry Treadway, a plodding, but incredibly thorough investigator, who soon realises there is far more than meets the eye in this spectacular execution the establishment seem keen to keep quiet. The morning following the murder, timid young legal clerk William Lamb, a man outstanding for his sheer lack of any initiative, finally makes the one decision which will change his life. Summoned by a reclusive client of his senior partner, he finds a terrified old man desperately seeking help. He forces on William a small casket of yellowing papers and tells him he must deliver an enigmatic message to his employer. That message produces a totally unexpected result.

At the same time, William meets Savannah Shelton, the gun-toting American hardcase who has been employed by an East End villain to monitor the old man’s home and movements.

Gradually the four principals are drawn together and into a labyrinth of unfolding secrets which mask an ancient mad and devilish scheme for world domination by a carefully selected and chosen sect who will stop at nothing to achieve their aim.

An international cast of background characters, all based on real people, support this concept brilliantly. A domineering German Chancellor recalls Bismarck, the immensely rich American vice-president could be modelled on any of the great and ruthless industrialists of the period such as Vanderbilt or Rockefeller – or even in modern terms Trump.

Even the ancient history is made to support their conspiracy. The great philosopher and thinker Plato did write 13 surviving letters to his pupil Aristotle, who was in turn the tutor of Alexander the Great – and did advance an early theory of eugenics.

Evans sets all this in the context of the 1880s – a period which could be said to have been the start of the modern age with the widespread introduction of the telephone, electricity, the motor car and rapid and terrifying advances in chemical warfare. She blends the whole in a convincing and horrifying narrative which marks her as a writer of enormous potential, perhaps even enough to forgive her own major crime in her TV career – the introduction of Graham Norton to the BBC!

It will be interesting to see how she follows this, but this is a superb story, well worth the read.