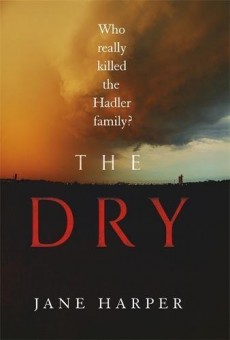 Policeman Aaron Falk returns to his rural hometown for the funeral of a childhood friend and family. But Falk’s investigation into the recent killings is complicated by another death long ago.

Aaron Falk, a police financial specialist in Melbourne, makes the five-hour drive to the small rural backwater of Keiwarra, for the funeral of his childhood friend Luke Hadler, and Luke’s wife and young son. Their deaths have the appearance of murder/suicide, and many think the prolonged drought which has pushed all the local farmers to the brink is the explanation. But Falk is persuaded by Luke’s parents to stay long enough to give the matter further scrutiny.

Local Sergeant Greg Raco is happy enough to have Falk work with him, and the pair soon uncover a few details which merit further study. Not everybody is so welcoming, however. After 20 years local memories still connect Falk with the death of Ellie Deacon, discovered drowned and leaving behind a note suggesting an assignation with Aaron. Particularly hostile are Ellie’s father and cousin, who delight in stirring local feeling against him.

This is an excellent debut novel by an expatriate Englishwoman which nonetheless conveys much of what it must be like in the Australian outback dominated by small sheep farms after two years without rain. Harper gives this background substance by creating a believable picture of a small rural idyll made hellish by a cloudless sky and a land so parched that every bit of surface water has long disappeared.

Against this altogether believable background the author has devised a plot which is not so uncommon: an outsider in receipt of the hostility of an inward-looking provincial township, where people are unwilling to talk and resentful of any challenge to their narrow horizons.  Their suspicion is, however, given validity by doubts over the circumstances of Ellie’s death, something which remains an unresolved issue in Falk’s psyche too. Falk’s father fled the town soon after the event, distanced from his friends and unsure about his son’s innocence until his death, heaping guilt on Aaron despite his innocence and bemusement at the turn of events.

It was the false alibi given by Luke which forestalled any action by police against Aaron, but now with hindsight Aaron wonders whether Luke was merely protecting himself, and whether it is something emerging from these past events which has come back to revisit Luke. The past and present remain tangled until the final pages, when Falk’s persistence is rewarded.

The story is told in real time, with passages in italics revealing crucial past episodes in the lives of the key characters which correspond with Falk’s discoveries. The dialogue feels natural, with enough ‘strine’ to give the reader a taste, but not so much that you have to reach for an Australian dictionary. I did have to investigate the ‘huntsman’ which Aaron found in his hotel room, but rather wished I hadn’t.