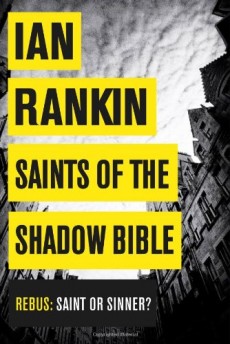 Saints of the Shadow Bible

Ian Rankin must be one of the few exceptions to the not returning to the scene of a previous triumph theory. His resurrected Rebus series is as strong as it ever was - and seems to have a energised lease of life in a Scotland where the independence debate is raging loudly.

Rebus has always aged in real time, unlike Sue Grafton's Kinsey Millhone, who is still stuck in the 1980s. So he's now in his 60s, and after a forced retirement and a brief stint as a civilian in the cold cases unit, he's now back in the force, and still as cantankerous and as much a maverick as ever.

Some things have changed, though. Rebus is now only a DS and reporting to his former junior Siobhan, who's a DI. And the power dynamics in the city have changed. Rankin is as topical as always, with the argument over Scottish independence and identity simmering in the background all through.

Saints of the Shadow Bible treads a line between Rebus's sometimes murky past and the present where he's one of a kind amidst the politically-correct young suits in today's police force. Not that there's anything so clumsy as flashbacks with a writer of Rankin's quality - you'll be wondering for much of the book just what our man knows.

The title is another line from the lyrics of the late and much-lamented Jackie Leven. In Rebus's world, it refers back to 30 years ago and an unlikely collection of saints - his then colleagues in CID, who swore an oath of loyalty on something called the shadow bible. But their behaviour was less than saintly, and has returned to haunt them as an old murder case is being reinvestigated.

Rebus's bête noir, Malcolm Fox, is the investigating officer - and anyone who's read Standing in Another Man's Grave will know that they hate the sight of each other. So their uneasy alliance is one of the standouts of the latest book, and one which will have you wondering who'll stab each other in the back first. Fox was never a strong enough character to carry his own books, but he is a valuable addition to the Rebus series, not least because his stint in complaints is coming to an end, meaning he will soon be back with the people he has been investigating.

As always, Rebus ploughs his own furrow, much to the disgust of his superiors, who have a high-profile murder to deal with. He seems more concerned with a car crash involving a university student which may not be all it seems.

Saints of the Shadow Bible grabs from the very first page where Rebus stamps in and kicks arse. And it's never anything but highly believable, as Rankin, with his usual grit and aplomb, juggles the past, present and Scotland's uncertain future. The book is peopled by a vigorous and vivid cast of characters, headed by a dinosaur who refuses to become extinct.