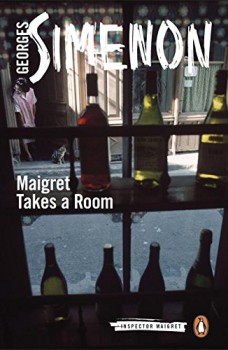 Janvier, one of Maigret’s inspectors, is shot and wounded whilst keeping watch on a boarding house as part of an investigation into a night club robbery. Madame Maigret is away visiting her sister in hospital and so Maigret takes a room there.

There is something very recognisable about the situation in which Maigret finds himself as the novel opens. His wife is away visiting her sister who is in hospital about to have an operation and it is clear that he is totally lost without her. When Lucas, with whom he has been having a drink, goes home he finds himself alone in the Place de la Bastille. On two occasions women smile at him invitingly, causing him to feel that they recognise him as temporarily a bachelor. He manages to resist them but it is only when he receives a call from Torrence to tell him that Janvier has been shot that he recalls himself to duty, the first part of that being to visit the hospital to which his inspector has been taken. He is relieved to learn that he is seriously, but not fatally, wounded.

It turns out that he has been shot whilst keeping watch outside a boarding house owned by a Mademoiselle Clement. The police have already searched the house in a vain attempt to arrest a young man who has been identified as one of two men who had held up a nightclub at gun-point and stolen the takings. It occurs to Maigret that he might gain valuable information by taking a room in the house and over the next few days he sets about making himself familiar with the occupants.

They are a varied group, the only thing they seem to have in common being that they are poor. Naturally they are all suspects, even two young girls, but Maigret can find nothing to suggest that any of them was involved in the shooting. He does, however, take a certain professional interest in the fat landlady herself. She seems to be flirting with him and professes to find all her tenants so charming that he suspects her of putting on an act for his benefit. She certainly seems to be trying to persuade him that everybody in the house is innocent. Having made no progress in finding the person responsible for the shooting, Maigret makes the next logical move and begins to look at the houses across the street.

There is always a subtlety about Maigret’s interviewing of witnesses, particularly in this novel. His questioning of the woman in the butcher’s shop reveals that Mademoiselle Clement has been buying more than her usual amount for the last few days. He now realises why she was eating in the kitchen in the middle of the night, though clearly not hungry. Maigret’s mind is of the kind that feeds off such details ...

On this occasion there is less of the busy Paris that we normally find in a Maigret novel. However, that doesn’t prevent it from being very French and very atmospheric. The street in which the boarding house stands is just off the Boulevard Saint-Michel but appears almost provincial by comparison. Children can play safely in the street, which has its own humble bistro, and the locals know which shops on the busier streets provide the best value.

As is frequently the case, the situation in which the crime took place is one involving deep sadness, almost as if Simenon is suggesting that among the Parisian poor there is bound to be conflict with the law. In this case Maigret is sympathetic towards the criminal and agrees to help him take the blame alone. We expect nothing less from a man who is not only a policeman but also a sentient human being.