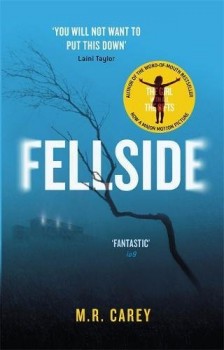 Jess doesn’t know who she is or why she is in hospital until she hears the word murder.

Jess Moulson is lying in hospital under police guard, and her memory returns as hesitantly as her moments of consciousness. An accident. A fire. A death. Gradually she realises it was no accident, and it wasn’t her boyfriend who had died. Jess, a heroin addict, is under hospital-arrest for the murder of Alex Beech, the ten-year-old boy from the flat above hers.

Although Jess, on her lawyer’s advice, pleads not guilty, she knows she is culpable and is ready to face the consequences. But her belief is she must die to pay for her crime. So, even before she is sent to Fellside, a private, maximum-security prison, she prepares her penance, her death, in the only way available to her; she stops eating.

Jess’s fire-ravaged body slides into a decline in the infirmary at Fellside. But someone doesn’t want Jess to die; he wants her friendship, and answers. Jess wants answers too, but more, she wants his forgiveness. Jess chooses life, unaware that life inside the prison walls is a twisted fabric of corruption, hatred and drugs.

While I love flawed characters, I would never have believed myself capable of rooting for a waste-of-space junkie on a suicide mission. But there are some authors whose writing style and voice are so unique, convincing and mesmeric that they foster an empathy for the most unlikely of protagonists. Carey has those qualities. He gave my suspension of disbelief bigger wings than those of a child watching a Harry Potter film. A deliberate allusion, because it was only after I closed the book that I realised how far I had travelled in Carey’s impossible fantasy world.

Often, I moan about the bewildering number of participants in the story. Although there are many characters in Fellside, they are introduced gradually and their names are sufficiently recognisable that there is no confusion. Their introspections, ranging from dark to humorous, are utterly believable in their uniqueness, and I applaud any man who can write from women’s points of view with such conviction. Carey rounded the main characters, even the lesser ones, so much so that even though with hindsight, there was a degree of stereotyping, it went by unnoticed and didn’t spoil the read. The characters’ behaviour, at times horrific, was convincing and reminded me never to break the law.

I sometimes find stories written in the third person point of view rather distancing, but the distinct voices of each character, the intricate layers of story and the discreet but effective backstory and place descriptions made me an emotionally invested fly on the wall in Fellside.

Although I didn’t find the story terrifying, Carey grabbed me and took me on a roller-coaster ride of sentiments. The story has originality and complexity, without being a difficult read. The twists are beautifully foreshadowed and squeeze the heart. Poignant is the key word. I can’t help but liken Fellside to The Green Mile, in plot, raw tenderness and quality. It’s an excellent read for all except the most sensitive.