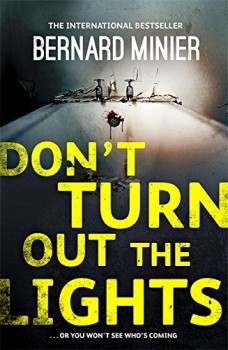 Don't Turn Out The Lights

When Christine Steinmeyer finds a suicide note in her mailbox, her busy life begins to unravel.

Christine Steinmeyer, a Toulouse radio presenter, opens her mailbox on Christmas Eve. She reads an unsigned suicide note. Although disturbing and seemingly genuine, it is not for her. But when a man calls her radio show the next day and accuses her of letting someone die, the doubts kick in. Within days, Christine has lost her fiancé and her job, yet her nightmare has barely begun

Commandant Martin Servaz, on sick leave from the Criminal Division of the Toulouse Police Force, receives a hotel room key in the post. Nothing else; no note, no explanation. His interest is piqued, even more when he discovers an artist died horrifically in that bedroom the year before. Even though Servaz cannot disprove that her death was suicide, he knows there is a predator out there, driving women over the edge. The question is whether Servaz will find him before he takes his next victim.

For two major reasons, dubbed films and translated novels, particularly French origin ones, have a place in my affection, right next to tax forms and cheesecloth shirts. First, voices change. Second, cultural idiosyncrasies don’t travel any better than cheap wine. So, it was with reservation that I opened Don’t Turn Out The Lights.

The prelude, or prologue, did not raise my hopes. It starts with a factually improbable scene which turns out to be a dream, a faux-pas that should be avoided because it hooks the reader with what is effectively a lie. However, after dragging my eyes down from where they had rolled, I ploughed on. I am so glad I did. Although this story has hiccoughs, Bernard Minier has created atmosphere, suspense and an intriguing plot, with good pacing. Added to this, Alice Anderson has done a wonderful job on the translation, making the text authentic without the feel of a word-by-word interpretation.

Written in the third person, the early chapters hop between the two main characters, Christine and Servaz. Although these hops are haphazard, they drive the story forward with the reader stressing about if and when these characters will collide. Clever. Christine and Servaz, as with most of the other characters, are well developed, and quite believable. The author sprinkles backstory slowly and with discretion, giving depth and flavour to an already interesting plot.

Although we meet some of the important characters early on, others are rather late in making their entrance. This, for me, knocked down the suspense somewhat, particularly when the author overdid the foreshadowing on one aspect, which I will refrain from revealing. However, there were enough twists and turns that it did not affect my overall enjoyment of the story.

There is great skill in Minier’s portrayal of Toulouse as a dark, brooding city hiding under a thin veneer of modern and chic. However, I didn’t quite get the proximity of the other milieus, which pulled me out of the story a little. And when Christine visits one of the less salubrious quarters of the city, I felt the locals were overplayed in the creation of atmosphere. Equally so, there is a character description part way through the story that took so long it interrupted the flow, and it was as if the author had walked on stage.

The ending is, after a healthy dose of suspense, a little too predictable and all-lived-happily-ever-after. And there were one or two conveniences and loose ends that caused a raising of eyebrows. At one point, I thought I was going to be subjected to the lengthy reveal where the criminal gets verbal diarrhoea, my bête-noire. Fortunately, it was cut reasonably short.

Forget this is a book written originally in French, and simply enjoy the Toulouse setting. For readers who like getting into the minds of victims falling apart, and want a suspenseful, dark ride, this is a journey worth taking.