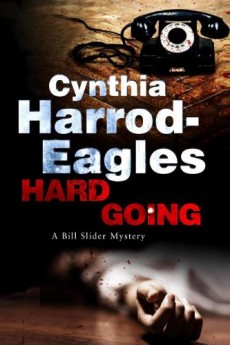 Cynthia Harrod-Eagles has been around for years without hitting the crime fiction heights. But her riot of picaresque characters and zesty word play make the books a pleasure to read whenever a new one tootles along.

Hard Going is the 16th in the series and in many ways doesn't differ much from what's gone before - you won't find hard-hitting social comment in Harrod-Eagles's books. What you will get is a neatly-plotted story, a writing 'voice' that a lot of authors would give their first-born for and a range of characters who line-dance off the page.

Her series hero, DCI Bill Slider, juggles his private life and police job seemingly without losing his cool and his sense of humour. Sidekick Jim Atherton has a hair-trigger mouth for clever word play (unlike their long-suffering Detective-Superintendent, Fred Porson, who can mangle a sentence at 50 paces), and keeps his complicated love life close to his chest. Like Stuart Pawson - another oft-ignored writer - the police team is sane and supportive, with just some edgy banter here and there. Harrod-Eagles does well with her female characters, particularly her feisty DCs Swilley and Connolly, who don't take any crap from the blokes.

This time out, the team investigate the death of former solicitor Lionel Bygod, who's been battered to death in his posh flat. All his friends say he was a lovely, kind man, but none of them seem to know much about his private life. The subsequent enquiry takes Slider and Co from their west London patch across the city to the council estates of East London, calling in on the busy world of Soho and the twitching lace curtains of north London suburbia as they uncover an unexpected past.

The writing isn't technically brilliant - the point of view hops around somewhat - and there's a tendency for all the working class characters to get a rough deal from the author's pen. For London, it's also low on black characters, although all the cafes seem to be owned by foreigners!

Harrod-Eagles always advances her characters' private lives, if only slightly in some cases. Bill and musician wife Joanna are about to have another child, which brings with it worries about money and childcare - this isn't a case of the woman automatically giving up her job. Bill's dependable babysitting father has a lady friend, and Atherton's notoriously roving eye might be straying while journalist girlfriend Emily is in the US.

Hard Going is a thoroughly enjoyable read - and Harrod-Eagles seems to have lost her habit of ending books on infuriating cliffhangers. I devoured it one chilly Saturday afternoon, wrapped in a blanket on the sofa - it's what winter weekends are meant for. This is a book that definitely doesn't live up to its title!