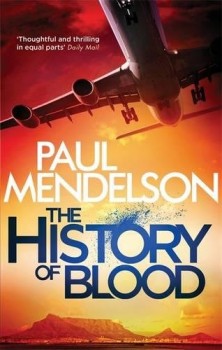 The History of Blood

The daughter of an assassinated politician is found dead in a Cape Town motel, her stomach full of cocaine. Police establish a link to an extended web of crime.

The South African police receive an emergency call from Chantal Adam, once a high-profile model, asserting she has been imprisoned in a Cape Town motel room. On arrival, the attending officers find her alone and dead. A post-mortem shows that she had ingested packages of cocaine, and when it is confirmed she was booked on a flight to Thailand, it is suspected that she has fallen victim to drug traffickers.

Colonel Vaughn de Vries of the Special Crimes Unit had personal contact with Chantal through his daughters, and is keen to follow up, especially since the Narcotics Unit have so signally failed to notice what was going on, despite being aware that the motel was being used for drug-related activities. De Vries is permitted to continue with his investigation, but is only too conscious that there are people looking over his shoulder.

As his boss Du Toit points out to him, a whole generation of South African society believe there is no place for the last vestiges of apartheid, and that is how the older Afrikaans officers are seen: results alone ensure their toleration. But de Vries makes no secret of his contempt for political correctness and is impatient of procedural restraints, despite the problems that his tendency for precipitate action creates for his bosses.

De Vries meets Heyns at the motel, a white woman officer also frustrated at the lack of opportunity to progress. She sleeps with de Vries and then pressures him to keep her on the case, and makes an unauthorised solo effort to gather evidence, which ends badly. However, de Vries pushes the boundaries and eventually uncovers a newly-established criminal gang involved in drugs and people trafficking, a gang with links to South Africa’s troubled past.

While de Vries is aggressively chasing up leads and exposing the full scope of activities of the principals, his colleague Don February is delving into the past in a more controlled manner. After the assassination of her father, Chantal was brought up by her uncle, Adam, but abruptly broke off contact once she became an adult. Adam has had Chantal monitored by a PI, for whom the job seems to mean something personal. De Vries and February between them move towards a complete answer to present crimes, and their root in past events.

As with de Vries’ two previous outings, events are rendered in the present tense and move at a rapid pace. The protagonist’s dynamism and willingness to bend the rules gets him a long way, but eventually he comes to a level where the level of protection enjoyed by his foes leaves it doubt whether he can succeed. Luckily, de Vries’ friend Marantz is available as a final resource when official action is insufficient.