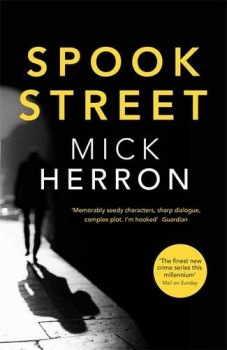 Jackson Lamb, head of Slough House, is called to identify a body discovered in the residence of a former senior spy, now suffering from dementia.  He confirms that the dead man was one of his agents.

This is the fourth outing for Jackson Lamb and his team of ‘slow horses’, the name given to former members of the Intelligence Service who have, in a variety of ways, ruined their careers and are now banished to a run-down building in the City of London. There they are given virtually pointless tasks in the hope that they will decide to leave the service, thus forfeiting their pensions. They are deliberately forgotten because Slough House is “the oubliette of the Intelligence Services” and nobody is ever expected to emerge from it – at least not alive. When the novel begins, Jackson Lamb is away and, as there is nothing to do with the time but waste it, the occupants are simply amusing themselves as they see fit.

River Cartwright, the grandson of a former senior member of the Service, is one of them. He has been regaled by the old man’s tales of his exploits all his life but they have now become confused and meandering owing to memory loss and dementia.  It is River’s body, found in the bath and shot through the head, that Lamb identifies. It is assumed that his grandfather, who rarely leaves the house, has mistaken him for an intruder and killed him.

The investigation leads to a recently burned out house in France which the locals have always avoided. Known as Les Arbres, it seems to have been some kind of hippy commune, though, strangely, it seemed to contain only men and children, with no sign of women to care for them. Lamb, without any authorisation, decides to look into the incident and a story begins to emerge - one that has its roots in actions taken by the Regents Park Intelligence Services many years before, when the missing grandfather, David Cartwright, was deeply involved in the decision making.

Lamb is convinced that there is a connection with a suicide bombing that has just taken place in West London. The novel is concerned with establishing precisely how the missing man, the mysterious house in France and the bombing are connected.  The way in which this is accomplished shows a grasp of surveillance tradecraft that seems totally professional. One scene in particular where a spy is followed by another who, in turn, is followed by two more is very cleverly written. However, as well as being a spy novel, this is at the same time a thriller.  As it progresses and the mystery becomes clearer the suspense mounts. In the light of what we are told at the beginning, much of what emerges comes from a most surprising source.

The element of surprise is a constant in the novel, but not for one moment is it anything other than totally convincing. Equally so is the cynical portrayal of the Intelligence Services. Whilst they are always concerned with ensuring the safety of the country, they insist on doing this in such a way that blame will never be attached to them if things go wrong. If mistakes have been made in the past they must remain in the past. In addition, there is always the desire for career advancement, which requires an innate capacity for placing blame elsewhere.

What distinguishes this author from others writing tales of espionage soon becomes obvious. It is the command of language that allows him to say so much in a few words and to say it so memorably. Examples abound. COBRA meetings are arranged at a very early hour so that if its members make no progress they can at least claim that they have had very little sleep. When an intruder has broken down virtually every door in the building, Slough House is described as being now ‘largely open plan’. Lamb’s having an empty whisky glass in his hand when there is a full bottle on the table is ‘presumably a temporary anomaly’. He takes sarcasm to almost a new level when addressing his unfortunate employees and, whilst sarcasm is not invariably funny, it certainly is when he uses it.

This ease of expression adds an extra dimension to what would in any case have been a skilful plot with extremely well-drawn characters. Spook Street is arguably even better than Real Tigers, Herron’s last Slough House novel, and cannot be too highly recommended.