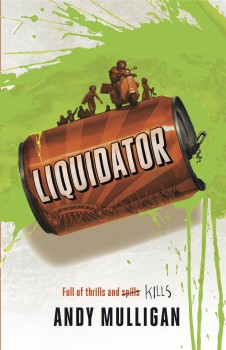 A disparate bunch of teenagers take on the might of a global corporation in a race to save the life of a boy they’ve never even met.

Ten teenagers are getting ready to go on a week's work experience. Some of them are looking forward to their placements, others aren’t. Vicky had been hoping for a job at a newspaper office but, when her friend Stagger’s motorbike plays up, she gets to school late, and doesn’t get a sympathetic hearing from the teacher who’s dishing out the assignments. She ends up with a job as an assistant sandwich maker at swish lawyers, Lockson and Lockson.

On her first day, Vicky is pleased to get a rapid promotion to telephone receptionist, but that soon goes horribly wrong when she spills a fizzy drink over her boss’s laptop. Anxious to make amends before she gets the sack, Vicky breaks all the rules and takes the laptop to school computer whizz, Ben, who’s being forced into flower-arranging instead of sorting out the florist’s computer system.

What the teenagers find on the laptop is both frightening and horrific, and they’re pulled into the world of big company promotions, as a new fizzy drink – Liquidator – is about to be launched into the world market in the biggest marketing campaign ever. Vicky, Ben, Stagger and their other friends are propelled into a dangerous world where companies that stand to make an awful lot of money exploiting an unsuspecting public are prepared to do anything – even kill – to make sure that their dirty secrets remain out of the public eye.

Liquidator is told from the varying viewpoints of ten very different teenagers. Vicky is loyal and determined, although her common sense is sometimes questionable! Edgar has a deep interest in drains. Twins Molly and Polly are determined to take the local newspaper by storm. KatKat gets an amazing opportunity to sing with the world-famous Snowy, who’s about to stage the largest ever fundraiser in support of Africa. Michael realises his ambition to sit in with emergency service dispatchers. Eleanor finds work as a dog-walker and Leela gets to shadow a surgeon who’s just about to retire.

The short, sharp chapters, told in different voices and different styles push the story along at a breathless pace with both humour and style, as the teenagers race to save the life of a boy they’ve never met and warn the world about the danger of Liquidator. They’re pitted against ruthless opponents who manage to be chilling without descending into caricature. They pick up unlikely allies along the way, including a wonderful network of lorry drivers, willing to go the extra mile for a bunch of kids they’ve only just met.

Liquidator epitomises all that’s great about young adult writing at the moment. It’s exciting, chilling, heart-warming and absolutely exudes fun and energy. Reading it, you’ll believe absolutely that this group of brave, loyal, intelligent and enterprising 13-year olds really can take on the might of a global corporation and win. But a happy ending is by no means a certainty, and there are some genuinely heart-stopping moments in this quality teen thriller.