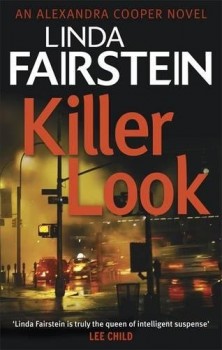 This is the 18th outing for Alexandra Cooper. As the book opens she is taking leave from the Manhattan DA’s office while she recovers from an abduction which has left her with PTSD. Unable to relax at home, she finds it difficult to resist involvement in a case which drops into the lap of her boyfriend Mike, a NYPD homicide detective.

The assignment begins with the discovery of a body in the East River, so badly decomposed that the only means of identification is the manufacturer’s series number on the breast implants. A second fatality shortly follows, the apparent suicide of fashion designer and brand name Wolf Savage. Surprisingly DNA evidence shows Savage to be the father of Tanya, the dead woman.

Savage turns out to have had a very active libido, five marriages and numerous other relationships having produced a number of children all with a sense of entitlement to the assets of the Savage empire. There is evidence that the brand was in trouble, which might explain a suicide, but Savage had a major show at the Metropolitan Museum of Art coming up; that and some of the circumstances in the room where he died suggest his death was murder.

Despite her lack of official standing, ‘Coop’ becomes an unpaid detective and makes a substantial contribution to the case. She traces designer buttons matching one left at the scene of Savage’s death, and she gains valuable background information from Savage’s family and co-workers. Eventually she crashes the show incognito and brings about a satisfactory denouement.

As a newcomer to the series, I have to say that after so many excursions, the author still manages to imbue Alexandra Cooper’s activities with life, and to keep the action moving along at a good pace with barely a break. It is also fully understandable to those who have not met the protagonist before; there is sufficient back story to set the tale in context but no more than that.

Cooper is very comfortable: a private income, a holiday house in Martha’s Vineyard as well as a city apartment, a list of top restaurants where they know her by name.  This must make it hard for some readers to identify, although Coop’s battles with DA Battaglia and the dangers she braves in her crime-fighting activities will no doubt engender some sympathy.

According to the author’s post-script the fashion industry is worth four trillion dollars per year, or two percent of the world’s GDP. Fairstein has done her research, and convincingly describes the hard work and bitchy squabbling that goes on behind the public face of the dream machine. I especially enjoyed the reference to the appeal of Downton Abbey in New York, and its impact on fashion. Bob hairstyles and sparkly headbands are all the rage, apparently.