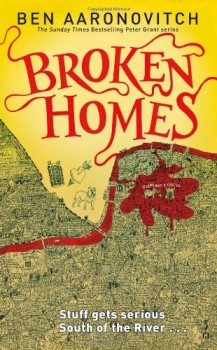 A car crash with a missing body, a suicide on the Tube, a stolen book of German magic. What do all these have to do with a ‘sink estate’ in South London? PC Peter Grant, and the others at the Metropolitan police supernatural crime squad, has to juggle all of these issues as his enemy the Faceless Man returns. But will he find where the danger lies before it’s too late?

This is the fourth book in the Rivers of London urban fantasy series and magic is front and centre in this adventure. There are crimes, but they take a back seat to furthering the evil magician Faceless Man storyline. There are still a few insider looks into the functioning of the Metropolitan (and other) police force, but none of the police officers who have appeared previously turn up in this book.

Their place is taken by nearly all the magical practitioners, gods, goddesses and fae from the previous books – even the Quiet People make a cameo appearance. In addition, Sky, a dryad, is introduced. She’s an inhabitant of Skygarden Tower. This is an estate of such plausible hideousness that I looked it up to see if it really exists (it doesn’t). Grant’s previous architectural ambitions are put too good use in describing the utopian ideal and the grim reality of what the estate is like. In this case the ideal is based in the Ghostbusters’ School of Supernatural Architecture.

The lack of a solid crime narrative makes the beginning of the book a little fragmented. There’s also a long description of a fair involving Father and Mother Thames that seems to have no purpose within the story, unless it is setting things up for later books. This is still an entertaining book, however. There are a couple of great set pieces. We see Nightingale in action and it becomes clear why he’s in charge. As always there’s the fun of watching them trying to investigate magical crime through, mostly, non-magical means. The climax surprised me, and then I realised that I should have seen it coming all along.

I have to admit to being a complete fan of this series and this book did not disappoint. However, I wouldn’t recommend it to someone who is new to the series. They should start at Rivers of London or Moon Over Soho, which give the background to this storyline.