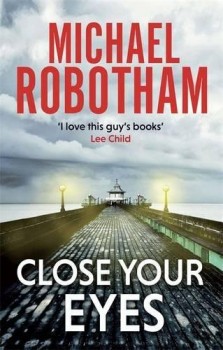 Clinical psychologist Joe O’Loughlin is drawn unwillingly to help solve a double murder - a mother and daughter found in odd circumstances in a remote farmhouse. This involvement leads to Joe’s family becoming endangered by the attention of the damaged murderer.

Clinical psychologist Joe O’Loughlin is a familiar character to the who have read others in this excellent series by Michael Robotham. Joe’s family circumstances and his developing Parkinson’s lend layers to the plot which feeds the ability of the reader to identify not only with the unfolding drama but also with the mental state of many of the protagonists.

In this case, a mother and her daughter are found murdered in their rural farmhouse. The daughter is tenderly laid in bed but the mother has been subject to a brutal, frenzied and sexual assault. Investigation exposes a sexually adventurous history for the mother. The extended family and friends of the deceased have their own stories and there appears to be reasons why many of them could have been the perpetrator of the crime.

In investigating the case Joe uncovers histories and associations which give the plot layers and clues which make the reading cryptic and interesting. A series of assaults are investigated which may or may not be linked to the murders, but which could explain the motivation behind the assaults.

The story is set in North Somerset in the areas around Clevedon. Sometimes when an author makes such a clear geographical connection it makes the novel feel awkward for the reader who is familiar with the surroundings but Robotham handles this very capably and as a result this adds extra realism to the story.

Robotham writes in a very engaging style; it is easy to lose time when reading this book with the desire to know what happens next. The writing device of the observations of the murderer, interspersed throughout the main plot, works well. It tempts the reader with the notion of giving clues to the identity of the killer but actually gives depth to the motivation and sense of foreboding of imminent disaster.

This is an excellent addition to a thoroughly good series.