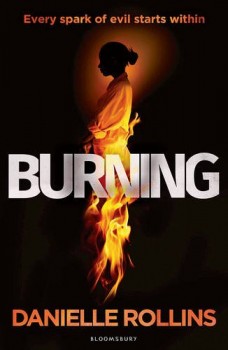 Life at Brunesfield Correctional Facility is grim at the best of times, but then when a new inmate arrives, strange and dangerous things start to happen.

Brunesfield Correctional Facility houses various categories of young offenders, mostly tough, streetwise teenage girls like Angela, Cara and Issie, there for reasons like robbery, car theft, destruction of property and drug offences. Inside its grim walls they form their own cliques and gangs, overseen by a variety of prison officers. Some, like Officer Brody have no sympathy whatsoever with any of the detainees and are happy to hand out punishments at the drop of a hat. Others, like 20-year-old Officer Matteo, are more inclined to give the girls the benefit of the doubt.

Seventeen-year-old Angela Davis just wants to keep her head down for another few months until her release date is due, then she can finally see her younger brother again. But there’s a fly in the ointment that she doesn’t want anyone to know about. Her mother has disowned her and won’t have her back. If the authorities find out, she will be forced to stay in juvenile detention until she turns 18.

When a new girl arrives and is promptly put into the hated and feared segregation ward, rumours start flying around that, despite only being ten years old, Jessica has already killed her whole family. When Angela is asked to look after the young girl, she’s dubious, but not in a position to refuse. Then strange things start to happen around Jessica and things become too hot to handle.

Burning is a slick, fast-paced young adult thriller that quickly establishes its characters. Angela, the narrator, still misses her father, despite the fact that he used to give her nightmares by telling her frightening tales of monsters when she was young. Then there’s the sinister Dr Gruen, who’s trying to recruit girls into her SciGirls programme by dangling the carrot of early release from Brunesfield. There’s also the young, attractive Ben Matteo, who provides a much-needed antidote to the unpleasantness meted out by the other officers.

Danielle Rollins does a good job of building the feeling of oppression hanging over Brunesfield and quickly adds in a genuine air of menace and creepiness that pervades every page as Angela’s fears and suspicions grow. For anyone who likes a tinge of horror with their YA, Burning is a must. I’m just hoping there will be a follow-up, as I want to know what happens next to Angela. But even if this doesn’t turn out to be the start of a series, it’s a good, standalone read, proving the point that Angela’s father used to make that the so-called monsters are by far the most interesting characters in any story.