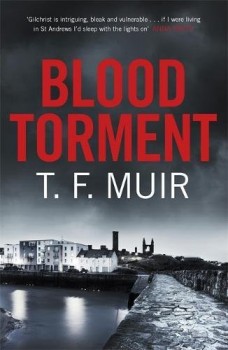 DCI Andy Gilchrist and his team are on the case of a missing three-year-old girl. But is this abduction a kidnapping or murder? And how involved is the girl’s mother?

When Katie Davies goes missing from her bedroom early one April morning, the first suspect soon rears his ugly head; Samuel Bell, a known paedophile, who moved into the Crail area three weeks before. He is soon under arrest and being interviewed. But a search of his home reveals nothing to do with the abduction of the little girl. He is released and kept under surveillance.

Meanwhile, the little girl’s family is proving unhelpful. Katie’s grandfather, Dougal Davies, an ex-MSP hounded out of his post after allegations of matrimonial abuse, makes a statement to the kidnapper on national TV. His veiled threats and false promises will surely interfere with the investigation. Katie’s mother, Andrea, is clearly lying about something. Was she ‘otherwise occupied’ when her child was taken? Or was she involved? As for Katie’s aunt – her indifference is inhumane.

Everywhere DCI Andy Gilchrist turns, he comes up against walls of silence. Then Samuel Bell’s body turns up, and Gilchrist is not only faced with a seemingly unsolvable case, but also an investigation which is moving uncomfortably close to home. Will he and the team ever find Katie? Or is it too late?

As a fan of Rebus, I was looking forward to meeting Gilchrist, his St Andrews’ counterpart. I was not disappointed. Overall, I found his character well developed with discreet backstory that didn’t affect the pacing. Furthermore, although his private life and domestic problems are not particularly unique, they round the DCI out well without detracting from the overall plot.

Muir certainly pulls the reader in to the dark and ugly side of St Andrews with confident yet sparing description and believable dialogue splattered with dark humour. However, there is a degree of gore in the descriptions of the violent crimes scattered throughout.

On the one hand, Gilchrist comes across as sharp and intuitive. On the other, he is achingly slow to connect the dots in certain places. These factors don’t marry well. I also felt Gilchrist was not focussed on solving the kidnapping, and in places the sub-plots overtook the main plot. In the end, it seemed the urgency in finding the child was more about Gilchrist not losing his job than fear for the child’s safety. Obviously, he had to make his way through the box of red-herrings and plethora of suspects, including family members, none of whom had any redeeming features. But between Gilchrist’s lack of urgency and the dysfunctional family, at one point I was convinced the girl would be better off not being found.

In real life, we know that often the victim knows the criminal. In others, there is no association and the randomness surprises. But that is real life. In crime stories, the reader feels cheated if all the suspects aren’t put on parade relatively early on. Unfortunately, although there was a degree of predictability in Blood Torment, there were late-comers to the party, which was disappointing.

However, my major problem with the book is a small but irritating detail; the names of some of the many characters; Jack Gilchrist, Jackie Canning, Jessie Janes, Jenny Carlton. As one of the keys to unlocking the case is about a name, I am surprised Muir paid so little attention to his choice of character names. I found their similarity distracting, and at times confusing.

That said, this is a fast-paced, satisfyingly gritty read, with one or two likeable characters. For Gilchrist fans, there are enough loose ends pointing to another book in the series. I look forward to the next chapter.