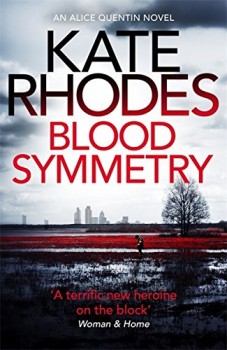 A woman and her son are abducted. The boy is found wandering and, soon after, a pack of the woman’s blood is left on a doorstep. Forensic psychologist Alice Quentin must help the traumatised child uncover his memories.

Forensic psychologist Alice Quentin is a vividly portrayed and nuanced protagonist whose own complex and harrowing history is a central part – and often rivals – the central storyline. In this bone-chilling psychological thriller, she must unlock a child’s memories and get inside the mind of a killer if the police are to have any hope of saving his kidnapped mother.

What makes the story so original, exciting and truly disturbing is that the underlying premise is based on reality, making the grim events described horrifying possible. In the late 1970s a new medicine to treat haemophilia was developed in the US. Demand was such that the makers took blood from wherever it was offered, including prisoners and addicts with diseases such as HIV and hepatitis. Contaminated Factor Eight medicine was shipped around the world. In Britain alone 4,800 haemophiliacs were affected. More than 800 have died from an AIDS-related illness and hundreds more from hepatitis C.

In 1991, threatened by legal action, the government made small ex-gratia payments to survivors on condition they would take no further action. No fault has ever been admitted either by government or the big pharmaceutical companies.

The story is made so emotional and authentic by Rhodes’ personal involvement. In the early 1980s, her author and film-maker husband was given hepatitis C by infected blood and lived with the illness for 25 years before a grim course of chemical treatment saw him regain his health.

Clare Riordan and her son Mikey are abducted from Clapham Common early one morning. The boy is later found wandering disorientated and soon after, a pack of Clare’s blood is left on a doorstep in the heart of the City. Alice is brought in to help the traumatised child uncover his memories – which might lead the police to his mother’s captors. But she quickly comes to realise that Clare is not their first victim. And she is unlikely to be the last of killers driven by a desire for revenge.

This pacey, finely-crafted plot is an acute reminder of how bureaucratic and medical incompetence can lead to mass tragedy – and how difficult it is to get anyone to admit to fault. What makes it so compelling is that Rhodes writes with real heart. Alice is just one of a cast of believable and entertaining characters and both the plot and the writing keep the reader thoroughly engaged.

Even Alice’s relationship with DCI Don Burns has a key part to play. They’re partnered in this investigation, and she’s unsure of the work-personal balance and still uncertain whether to fully commit.

Getting inside the mind of a killer isn’t for the faint of heart. As well as being clever, pacey and gripping, this story wallows in gore. And fellows, don’t be put off by the woman’s angle. Alice Quentin has a much wider appeal – and this story is quite literally bloody brilliant!