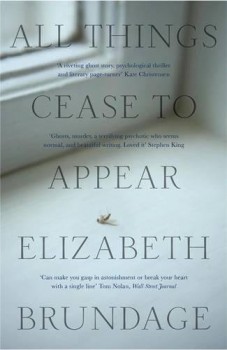 All Things Cease To Appear

A college professor discovers his wife as the victim of an axe-killer in their farmhouse near Albany and his three-year-old daughter alone – the second tragedy in an apparently cursed house.

This dark and tragic work offers a haunting story combined with beautifully crafted prose, characterisations and imagery and touches of both the gothic and noir. It’s a murder mystery – although there’s never much doubt about the killer’s identity – a ghost tale, a family drama and a love story. It’s also an evocative portrait of the people and landscape of upstate New York in a period of rapid change interwoven with a fascinating examination of the motivation and behaviour of a psychopath.

This tale of two families, both with more than their share of unhappiness, is told entirely in flashbacks following the murder of Catherine Clare in her farmhouse home – a house already cursed by tragedy with the long-suffering wife of its former owner having committed suicide, killing her husband in the process and leaving their three boys orphaned.

Art history professor George Clare, taking up a post in a nearby private college, buys the property cheaply and moves in with his wife Catherine and young daughter. Catherine soon feels the ghostly presence of the tragic former owner as the house, combined with her growing awareness of her husband’s nature, generates a creepy suspense.

Elizabeth Brundage brings the small town and its characters to life convincingly and the introduction of the supernatural enhances her theme that there is a spiritual dimension to existence. Nearly two-and-a-half decades pass before Franny, the daughter who was in the house when her mother was killed, returns to clean out the place and finally uncovers what really happened.

It’s a brilliant piece of genuine literary writing, with well-rendered characters, co-workers, friends, George’s girlfriend, and the three Hale boys combining to shed light on the Clare family’s life together.

If this fine book falls short at all, it is in the investigation of the crime. I know little of American law, but it seems likely the circumstantial evidence would have been sufficient to arrest and prosecute, even possibly gain a conviction. But that would have deprived the reader of a superb story – and a suitable, if delayed, rough justice finale.