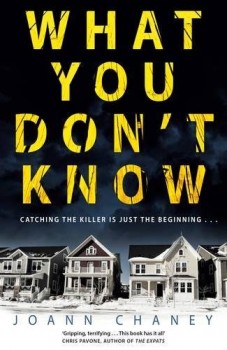 What You Don't Know

Denver, 2008. Two detectives discover the bodies of 33 murder victims. Seven years later, their killer is on death row, but the body-count is just about to go up.

Detectives Paul Hoskins and Ralph Loren, finally have Jacky Seever, after weeks of tailing him on the word of Carrie Simms, the one victim who got away. But even they aren’t ready for the recovery of 33 bodies hidden in the crawl-space of the serial killer’s house. Sammie Peterson, the disliked journalist who is prepared to sell her body to Hoskins for the big scoop, is there on the scene.

Seven years later, Loren is still solving crimes. His partner, Hoskins, is stuck in the basement solving cold-cases after he beat up a suspect. And Sammie is selling makeup in the mall. But their paths are about to cross again with the discovery of two bodies carrying Seever’s trademarks; two people loosely related to the Seever case. The questions they have to answer are whether this is a copy-cat killing or whether Seever, now on death row, had a partner, and whether his wife, Gloria, is as innocent as she would have everyone believe?.

‘Is this a copy-cat crime’ novels are becoming as commonplace as Romeo and Juliet rewrites, and about as original. So, I was not expecting anything fresh or fascinating. I took a deep breath and started reading. After two chapters I was itching to throw the book across the room. Loren, Hoskins and Peterson were about as likeable as Hannibal Lecter without his charm and intelligence, and I can only describe the writing style as wittering. The style gave me visions of an old woman taking one step forwards, then stopping to prattle for five minutes before she took her next step. I started wondering if we would ever get the old woman beyond the front door. Reading was a chore until little by little I got used to the babbling style, and I must admit, even began to enjoy Chaney’s singular voice.

The story is written in the closed third-person, almost every chapter dedicated to one of the major characters; Hoskins, Sammie, Carrie, Gloria. Much of the wittering is ‘introspection’, but also there is a significant amount where the narrator’s voice rings loud and clear. However, once acclimatised to this style, and in the absence of narrator opinion, which would be unforgivable, it didn’t overtly affect the pacing. It did make the characters rounded and satisfyingly flawed, although somewhat predictable.

The plot is satisfyingly twisted, and the sub-plots sufficiently unusual that, if you engage with the style, this is a book to keep the reader up into the wee hours. I found the clues and foreshadowing slightly heavy-handed, and decided where it was going and whodunit in the first few chapters. That said, it is definitely a book worth reading for those who like grit and getting inside people’s heads. JoAnn Chaney has a distinctive style and an admirable confidence in her voice and story.