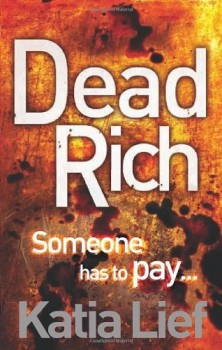 Ex-NYPD cops, now turned PIs, Mac MacLeary and his wife Karin Schaeffer are working a boring case involving surveillance of a billionaire businessman on behalf of his suspicious wife. The case is going nowhere, so when Mac is offered a huge sum of money to do a simple job in London for a large security firm, he jumps at the chance. He is also offered the opportunity to spend a couple of weeks on the holiday island of Sardinia and so takes his family, together with his assistant and researcher, Mary Salter and her son, for the holiday of a lifetime.

Mac and Karin stop off in London to carry out the assignment then fly to Sardinia to meet the rest of the family. When they arrive, though, there is no sign of the family. It becomes apparent that they are really missing and not just out exploring the island, but who would want to kidnap them, and why? Is the kidnap linked to the case left behind in New York?

This is an unusual book. It takes a long time to get into the story and there is lots of seemingly irrelevant detail. While the story, once it properly gets going, is undoubtedly exciting, with plenty of twists and turns, several bodies and a surprising ending, I was left asking the question, why did they bother?

It seemed to me that the perpetrators could equally well have achieved their aims by leaving the family to have a quiet holiday, unaware of the crimes the kidnap was supposed to prevent them investigating. I also wondered how many American families would all have passports and be able to travel to Europe at a few days’ notice, as so few Americans have passports at all.

However, if one accepts that the kidnap was justified, then the story is worth reading. Ranging through New York, London and Sardinia, involving the NYPD, the FBI, the Italian carabinieri and the local municipal police, the investigation is complex and the search across the island is exciting. Katia Leaf is an accomplished writer, but this was perhaps not her best-ever plot.