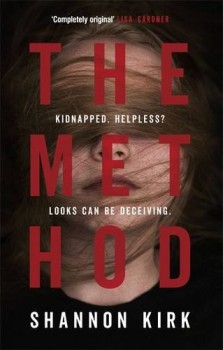 It’s not every teenage kidnap victim who can sit in captivity coldly and methodically cataloguing every asset that might give her an edge over her captors. But nothing about this particular 16-year-old is ordinary. She’s capable of switching emotions on and off and deciding when she wants to experience them. She examines the world around her with clinical detachment. She’s a survivor. She’s also pregnant, which is the reason she’s been snatched in the first place.

Special Agent Roger Liu has been with the FBI for 15 years. He specialises in child abduction cases and the case of Dorothy M Salucci is going to turn out to be his last with the Bureau. He’s spent the last year working a series of similar cases where teenage girls, usually between six to eight months pregnant, simply disappear. In most cases, there’s a misconception that the girls have run away from their parents’ home. In a country where in the region of 1.3 million teenagers go missing every year, it’s not exactly surprising people jump to that conclusion, but the delay in investigating means that critical evidence is lost.

The Method is told in the first person by two separate narrators: the kidnapped girl and the FBI agent searching for her. Their voices are distinctive enough and the chapters are clearly labelled, so there’s no danger of confusion. But the fact that the story is essentially being narrated to the reader in each case made it somewhat difficult to get into, at least to start with, as I immediately knew that there was no danger of the protagonists not surviving to the end of the narrative. The air of distance created by the fact that both leading characters are looking back over a number of years didn’t help. But stick with this book and you’ll be amply rewarded.

The kidnapped girl is a fascinating character, even though her strengths are the very things that at times might alienate the reader from her. She’s certainly like no other teenager I’ve known or read about. I wouldn’t call her engaging, though, although she’s definitely fascinating.

Like all fictional cops, Roger Liu has his own demons in his past that have led to him refusing promotion to remain doing the type of work that’s important to him. Working with him is his partner, Lola. She chews tobacco, uses her sense of smell to follow suspects and is generally a thorn in Liu’s side, but together they make a touch team. Helping them is elderly chicken farmer, Boyd, as much a character as either of the FBI agents.

The reason girls are being kidnapped is a dark one, which lends some degree of justification to the actions of one of their victims. Altogether, this is an unsettling book, but the unusual lead characters soon started to grow on me, and the book’s strengths lie very much in not whether the victim escapes, but how she puts all her assets to work in her favour.

There’s a lot of moral ambiguity in The Method, which I always find appealing. There are also plenty of surprises, so be prepared to let the characters grow on you, and don’t resent their frequent digressions, as ultimately, everything does come together in this impressive debut.