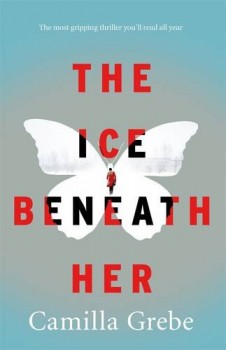 The Ice Beneath Her

A beheaded body of a young woman is found in an upmarket home of a controversial retail king. Stockholm’s homicide detectives and a criminal profiler are shocked when they realise that the murder resembles an unsolved case from years ago.

Homicide detectives Peter Lingren and Manfred Olsson are called to a terrifying crime scene at a business tycoon’s upmarket home in Stockholm. The owner Jesper Orre, the ruthless and scandal-prone CEO of the retail chain Clothes & More, is nowhere to be seen. However, in a marble hallway a body of young woman is found in a sea of blood, her head cut off and placed strategically facing the front door.
With no vital clues the investigation moves at a snail-pace until a horrendous realisation hits the team: the circumstances resemble an unsolved murder that happened ten years earlier, when a young man was also beheaded with a machete.

Enter Hanne Lagerlind-Schon, obsessed with Greenland, and the best criminal profiler, who was involved in the previous investigation. Her detailed reports covered every aspect of the killing. She’s suffering from early dementia, and battling her own personal demons: trapped in a loveless marriage and still hurting after the love affair with Peter which came to nothing years ago. Now faced with returning to do a job she still loves, and working with a man who’s pathologically scared of any commitment, she wants to solve the case while she still has control over her brain. Both Hanne and Peter tread very carefully around each other.

As Peter, Hanne and Manfred wade through minimal evidence and theories, third protagonist Emma Bohman is also looking for Jesper. Her story begins several weeks earlier, and her reasons for the search are completely different. During a chance encounter with Orre at one of his shops, the young sales assistant was swept away by the all-consuming love affair with the powerful man who had everything yet insisted on keeping their relationship secret, and borrowed large sums of money from her. The engagement ring he gave her seemed totally meaningless when he suddenly left her and became completely unavailable. As very strange things start happening to Emma, there is only one person whom she suspects, especially as her work colleagues seem to know all about psychopaths.

The Ice Beneath Her, translated from Swedish by Elizabeth Clark Wessel, takes its title from an Inuit proverb: ‘You never know friend from foe, ‘til the ice beneath gives way’, and announces a new avenue for Camilla Grebe who has previously written crime novels with her sister Åsa Träff, and also with Paul Leander-Engström.

This disturbing psychological thriller, constructed around a decent solid detective-story plot, deals with themes of love, betrayal and obsession, and also the lengths people will go to to fight for what’s their right or what they feel need to be done to take revenge. Rewinding Emma’s story and allowing two strands to move at different speed adds to the tension and helps with understanding as to how the events developed and how the characters relate to the most powerful feelings. Also, as each is of different age (Emma in her 20s, Peter in mid-40s and Hanne at 59) this presents a more interesting points of view and perspectives which change as the novel heads towards a shocking, unforgettable finale.