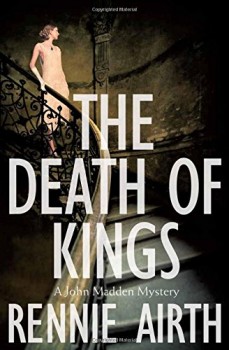 The Death of Kings

Retired Chief Inspector John Madden re-examines a ten-year-old murder amid fears that the wrong man was hanged for the crime.

It’s been more than four years since Rennie Airth’s last book, but this fifth story in the Madden series merely emphasises what readers have been missing. His observant, clever prose and evocative descriptions of time, place and emotions draw you into his story in a way which will remind older readers of the Queen of British crime writing, Agatha Christie.

In an age when heroes tend to be hard-edged, almost cut-out stereotypes, Airth has always managed to make Madden, his colleagues, even his adversaries, realistically human and although modern critics might mock an almost Dixon Of Dock Green approach, this gentler style is completely right for the times he describes.

It’s 1949 and as a rationed, reduced Britain struggles to come to terms with the peace, Madden, now retired, is persuaded to help his former boss Angus Sinclair, who fears the wrong man may have hanged, reinvestigate a ten-year-old murder case. Pushy young actress Portia Blake was strangled during a weekend visit to the estate of Sir Jack Jessup, a friend of the Prince of Wales.

Scotland Yard is called in, but local police quickly arrest a drunken former convict who admits the killing – a confession later withdrawn. He is found guilty and sent to the gallows.

When a jade pendant, apparently the one the girl was known to be wearing, is sent to a local police chief with a cryptic note suggesting that it could not have been stolen by the convicted killer, Sinclair becomes concerned that the locals, in their haste to wrap up a supposedly open and shut case, may have contributed to a miscarriage of justice. With the locals unwilling to re-open the case, and Sinclair affected by ill health, he asks his former DI, Madden, to look again at the evidence.

Airth measures out a series of revelations and twists with such subtlety that none feel contrived. A shift in a character’s expression, the explanation of a particular phrase or event, or simply an evocative description all move the story forward through the sheer art of detection. He also does a superb job of carrying readers, new and old, over the lengthy absence of his characters, particularly Madden and his family, and of the immediate post-war period with some beautifully written and graphic descriptions of the changes brought about by nearly six years of war.

The descriptions of his characters and use of dialogue not only develop the plot and carry it forward, but also allow him to gradually build the suspense. Madden is, as he has always been, a thoughtful, intelligent and painstaking lawman, devoted to his job and unusually in modern crime fiction, a protagonist with a solid, happy and totally believable family life.

As the pace picks up in the final third of the book, Airth introduces one of the least known facts of criminal history – the post-war arrival of the Chinese Tongs in London with their brutal ethos gradually forcing out the traditional Soho gangs and the start of drugs importation on a large scale.

The situations suddenly become more dramatic and dangerous – and the opportunities for misleading the reader increase. But those who like to pit their wits against fictional detectives will have little trouble identifying the guilty party from quite early, then like Madden, have their suspicions confirmed by an almost throwaway wartime reminiscence.

The fact that Airth can keep you glued to this brilliantly constructed and beautifully described tale says everything about his ability as a writer. If ever a story which involves several murders could be said to be gentle, this is it – and if it is to be the last of Madden, who is now approaching late middle age, it’s a superb way to go out.