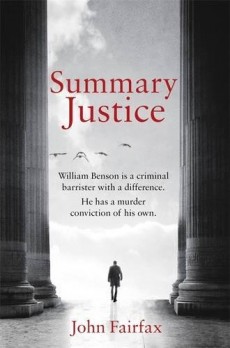 Barrister William Benson defends his first client from an accusation of murder, the crime for which he himself was convicted.

William Benson, the son of a fisherman, was convicted of the murder of Paul Harbeton in 1999. Disbelief in his protestations of innocence and a lengthy prison term proved to be traumatic, overcome only by his determination to qualify as a barrister after his experience at trial. Thanks to an anonymous benefactor who funded his studies, and support from one already in the profession, he is now qualified to work.

Ironically, acceptance of guilt is seen as a necessary step to his redemption, and he now cannot claim to be innocent, at least in public. There are many who think he should not be permitted to practice, including the Harbeton family, and he routinely suffers insult and assault from ill-wishers. None of the established Inns of Court wish to be tainted by association, but he has set up premises and is open for business.

His first case soon arrives – a murder with parallels to his own experience. Sarah Collingstone, mother of a handicapped child, is accused of killing her boss, Andrew Bealing. Her DNA on the murder weapon makes this look a simple case, and police have not looked too hard at other possibilities, but Benson is impressed by her insistence that she is innocent and is determined to give her an effective defence.

Benson is assisted by Tess de Vere, junior counsel at Benson’s own trial and a believer in his abilities, and Archie, someone he met in prison, who has become his clerk. Their researches, and Benson’s skills in court, elicit facts which at least suggest more than one murder suspect. Unfortunately, evidence to support such alternative theories proves difficult to find, and to make things worse, Benson’s client has been concealing facts which if revealed are sure to damage her case.

This is the first of what is promised to be a series with Benson, Tess and Archie taking on the cause of the innocent in risk of unjust incarceration. There is plenty of courtroom action with twists and turns as the crime is revealed to have several dimensions unexplored by the prosecution. The experience of the writer as a barrister has doubtless assisted in producing a convincing picture. There are enough people, like this critic, who are suckers for drama from the dock to probably ensure a healthy readership.

While the crime du jour is resolved satisfactorily, the matter of Benson’s guilt or innocence is still unresolved and will no doubt be further considered in sequels. Tess has already made enquiries which reveal facts never exposed at trial.  As a result, a romantic entanglement between her and Benson has been put on hold: the two have a mutual attraction but her doubts make her wary, providing plenty of scope for exciting developments to come.