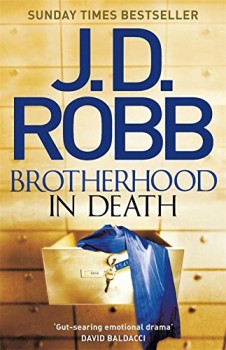 Lieutenant Eve Dallas has a dear friend, Dennis, who is injured when he walks in on the abduction of his cousin, Senator Edward Mira. Investigation uncovers darks sordid secrets that involve not only the senator but also a circle of his friends, a group bonded by ritual and cruelty.

Lieutenant Eve Dallas is approached by a colleague and friend, the police psychologist and top profiler, for help as her husband Dennis Mira has been seriously assaulted. Dennis had been visiting his grandparents’ house to meet his cousin, senator Edward Mira, to discuss the controversial issue of the sale of the house. When he entered the study he found his cousin tied up in a chair and then he was knocked unconscious by the abductors.

Eve, and her husband, Roarke, immediately become involved. The case becomes more sinister when the senator’s body is found hanging from a chandelier in the same house, ritually mutilated with a sign saying ‘Justice is Done.’

Similar murders ensue and the investigation uncovers an alliance, forged over many years, based on cruelty and humiliation and involving many prominent people. Uncovering the truth will upset many influential people and their families but, as ever, Eve Dallas is determined to expose the truth and bring the guilty to justice.

Now that I have discovered the ‘In Death’ series I cannot get enough of them. This story lives fully up to expectations. As usual, the characters are completely engaging. The main protagonists are familiar and their way of thinking and interacting is handled so well by JD Robb that the reader feels part of the process of deduction.

Particularly well handled in this novel are the characters of the wives and partners of the people who are either killed or at risk of being killed. The selfishness of the aggressively rich and ambitious women, their willingness to turn a blind eye in order to sustain a privileged status quo and the naivety of those who close their eyes to the truth are all exposed.

For most of the characters involved there is no happy ending. And the question as to whether justice has been done remains to an extent unanswered.