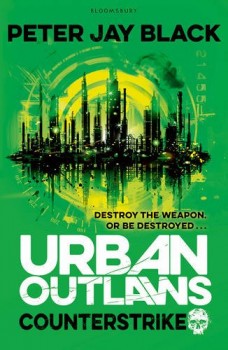 The Urban Outlaws face their toughest test – breaking into a top secret facility to steal Medusa, the ultimate weapon.

If you haven’t met the Urban Outlaws before, don’t worry, just jump straight in. But if you want to give yourself a treat, read the earlier books first. They’re fast and fun.

Jack, known as Achilles in the world of hackers, is the leader of the group. He’s the planner, the one who prepares his motley crew for every mission. Charlie is the inventor, the one who always makes sure there’s a cool gadget for every occasion. Obi’s skill is computers and surveillance. Slink is the climber, the one who can scale the outside of a building if he needs to. Wren, the youngest of the group, can pretty much turn her hand to anything now, and is an integral part of the team on any field op.

In Counterstrike, the Outlaws are once again up against their arch-enemy, Hector, and have to beat him into a top-secret building known only as The Facility. They’re both after the ultimate prize, the doomsday weapon called Medusa. Hector wants it for the evil he can carry out with Medusa in his possession. The Outlaws simply want to stop him. But nothing is simple in their fourth and most dangerous adventure so far. Penetrating The Facility will test the courage and resourcefulness of every one of them. They have five levels of security to crack to reach their goal, and for once, even the imperturbable Jack is showing signs of strain.

Peter Jay Black does a great job with his young protagonists and in their latest outing, he is capable of adding further layers to their characters, even in their penultimate outing. Jack, usually self-confident and capable, is distinctly rattled at times, and seeing him struggling was a reminder that despite his competence, he is still only a teenager, even with the weight of responsibility he carries. Charlie, clever and dextrous, has to confront the demons of her own past and return to the garage where her father was murdered. Slink, normally as slight on his feet as a cat, falls and breaks his ankle, but despite that, still insists on taking part in the mission, even to the extent of climbing with a cast on his foot. Wren and Obi both show maturity and coolness under pressure, but even they’re pushed to their limits.

The action is terrific, the stakes are high and there’s little time for anything light-hearted in this race for Medusa. And just when you think it’s all over, there’s one final twist that will leave you biting your nails and waiting for the next instalment of the Outlaw’s story. It’s hard to believe this teenager rollercoaster is drawing to an close. This is one series I would very happily keep reading!