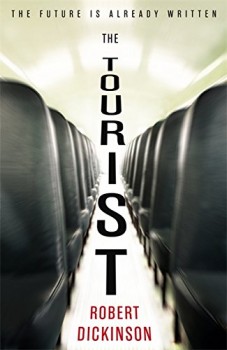 When a tourist from the future goes missing after a trip to a 21st century shopping mall, it falls to her travel rep to get her back safely.

Tri-Millennium Travel operates at the cheaper end of the time travel market. It’s the equivalent of an all-inclusive package deal to a resort on the Costa del Sol, except in this case, the destination of choice for tourists from the future seems to be an enormous 21st century shopping mall. They can mingle with the masses, avoid the food and generally gawp at how different people look and sound.

Spens is a travel rep. It’s his job to accompany the tourists back in time from 2345 and shepherd them round like any harassed travel rep. Things generally go reasonably well on the trips and the worst problem seems to be ensuring his clients avoid rip-off money changers. But this time, he ends up with a bigger problem to handle when something happens that didn’t make it into the records. On the way back to the enclosed resort, their bus stops because of an accident, and one of the party goes missing. At that point, Spens’ day goes distinctly downhill.

I’m usually a sucker for time travel fics, and always make the mistake of trying to get my head around all the potential paradoxes. I spent ages as a teenager trying to get to grips with Robert Heinlein’s short story By His Bootstraps, and still love the premise. But, by comparison, The Tourist never quite delivers the goods. Information is drip-fed at a snail’s pace. The mechanics are poorly explained, although we do learn that a lot of energy is needed for the time transfers, and it’s not always guaranteed that travellers will be able to get back from their destination. It’s a bit like waiting for a bus to come along, but in this instance, the bus might take 60 years to arrive.

The story alternates between chapters in the second person, from what appears to be a prisoner of long-standing who has a part to play in the return of the missing tourist, and the first person narrative of travel rep and reluctant investigator, Spens. I always find it hard to get to grips with anything written in the second person, and these passages were no exception.  This particular literary device always strikes me as both unnecessary and deeply pretentious. The passages written from Spens’ point of view were easier to follow, but only for a given definition of easy.

We learn very little about the time travellers of the future, only that they are taller than the people of the 21st century and appear largely unacquainted with living outside domes. There are hints of some sort of global catastrophe, but nothing is ever made explicit, and for me, that was the book’s downfall. It took quite a while even to learn that the book seemed to be set in London, not America. I had a lot of questions, but answers are few and far between, and as a result, I just became more confused and even more detached from the plot. There’s a lot of potential here, but The Tourist never quite lives up to it. Frequent capitalisation is not a substitute for good world-building.