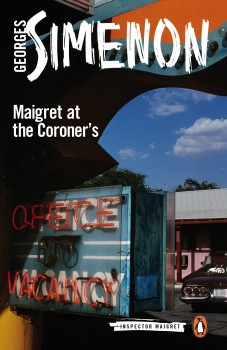 Maigret is informed of a possible case of murder in the early hours of the morning.  When a young man knocks on the door of the house to investigate he is beaten up by a manservant.  Maigret decides to pay a visit to the house.

The year is 1913 and the 26-year-old Maigret is secretary to the Saint Georges district police station in Paris. He is sitting reading a police report in the early hours of the morning when he is interrupted by the arrival of a young man who reports a shooting in a well to do area. It had been preceded by an appeal for help by a young woman from a second floor window. Maigret decides on his own initiative to investigate.

What this reversion to Maigret’s younger days does is something rather different. As well as presenting the reader with an absorbing story line, it enables Simenon to emphasize those aspects of the detective’s thinking which have emerged gradually throughout the series. For example, when Maigret visits what turns out to be a mansion, together with his young informant, he is instantly aware that the owner is lying to him. Everything Maigret says is treated with the utmost sarcasm and condescension. When he asks to see the room in which the incident is alleged to have occurred, he is dragged round every room in the house and invited by the supercilious Richard Gendreau Balthazar to see how groundless his suspicions are.  Maigret remains throughout – as he was always to be in later life – completely unfazed. He is calm and polite, but observant and aware that, whilst he is not sure what has happened, something out of the ordinary certainly has. He is more than ever convinced of the truth of what has been reported to him.

Simenon also picks up something that we have always noted about Maigret and gives an explicit reason for it. In a chapter entitled Maigret’s Earliest Ambition we learn that, owing to the death of his father, he had been obliged to give up his medical studies. However, he knew that he had never wanted to become a doctor as such, but something between a doctor and a priest, a man capable of understanding another man’s destiny. He wanted to put himself in every man’s shoes and had always thought that good police work should attempt to do this. Time and time again we find him trying to do exactly that in his investigations.

Of course, there is still a story to tell and it is told with the same attention to detail that we always find. The plot appears at times convoluted but it comes down in the end to two basic human desires, money and power, and the lengths to which some people will go to achieve them. The part that corruption plays in the novel is interesting, if the behaviour of Maigret’s superior, the urbane Chief Inspector Le Bret, can be called corrupt. It is regarded simply as taking care of one’s own - something that appears to be acceptable providing it doesn’t cause excessive damage - and Maigret is too much of a realist to feel that somebody in his relatively lowly position can change that attitude. However, Le Bret is clearly aware that he is dealing with someone who could prove troublesome and tempers his behaviour accordingly.

The characterisation, even of the minor participants, is, as usual, very convincing. The drunken bar owner, Old Paumelle, suspects that Maigret is spying, but that doesn’t prevent his drinking all morning and then preparing for his afternoon nap.  Germaine, too, is very well drawn, only too aware of the desires of the male sex and quite willing to give in to them providing there is something in it for her

It was an excellent idea on Simenon’s part to allow us to see the younger Maigret and particularly the younger married Maigret. He and Madame Maigret are only recently married and there is much more interplay between them than we have ever seen. Perhaps the change that occurs over the years is a comment on the inevitable rôle of a policeman’s wife.