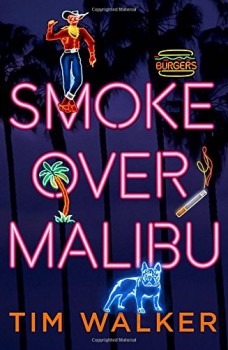 One-time screenwriter Lucky gets a call about an old friend who has gone missing, and his boss at Bart’s Olde California is assaulted during the theft of a cookie jar.

The Hon. Lucius Kluge, Lucky to his friends, is an expatriate Englishman living in LA, where he arrived ready to make his fortune writing screenplays. But he fell out with his partner, Glyn Perkins, who as far as Lucky is concerned was far too ready to prostitute his talent writing the latest superhero blockbuster, and to add insult to injury sailed off with his girlfriend Bijou.

Lucky is currently working for Bart, an elderly gentleman who runs a shop retailing junk, or perhaps choice items of memorabilia. Following one collection from the home of a deceased production designer and artist, a man arrives seeking ‘the blackbird’. Soon after, Bart suffers an assault, and a Dumbo cookie jar goes missing. When the jar is advertised for sale on Craigslist, Lucky and his colleague Raul go looking for the seller.

Meanwhile, Lucky receives a call. Glyn has been out of sight for several weeks, and his friends are getting worried. Although he has barely talked to Glyn and Bijou for years, he asks around without success, and finds that Glyn keeps a hotel room, apparently unused for some time. He calls on Bijou, who claims Glyn has gone back to Wales. Lucky is inclined to believe it, but when he gets a call from Glyn suggesting he is being held against his will, rides to the rescue.

This is a book of great charm, replete with numerous running jokes. Bart calls Lucky and Raul by the names of different Hollywood duos whenever they meet: Thelma and Louise, and so on. Raul is persuaded he sees minor celebs everywhere he goes. Bart’s wife is obsessed with juju. Above all there is Lucky: impervious to the latest trends, in particular superheroes in all their many forms.

The whole adds up to a gentle and amusing commentary on Southern California and Hollywood life. LA has formed the basis for such parodies for a century now: a place where people re-invent themselves, at the crest of the wave of social evolution. Smoke over Malibu suggests this phenomenon is unlikely to change anytime soon.

Cultural references are almost exclusively 21st century, with a focus always on the latest trends. People have jobs that barely qualify as real employment in most of the world. One character, Scooter has amassed a fortune developing something called ‘bacon ninja’ which is played on a mobile phone. Readers of a certain age will find this scoffing entirely appropriate, although there is enough here to amuse even the greenest.

This is Walker’s second book. His prose and dialogue flows easily and the author’s light touch makes the whole a joy to read.