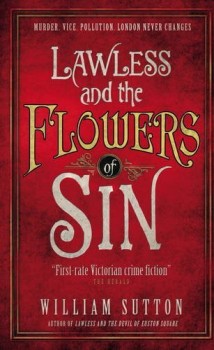 Lawless and the Flowers of Sin

As a reluctant Inspector of Vice, Campbell Lawless must make a reckoning of London’s houses of ill repute. His inquiries draw the attention of powerful men, merciless in defending their reputations.

Campbell Lawless has grown up since he quit his apprenticeship to his Edinburgh watchmaker father and travelled south to become a novice detective at Scotland Yard.

Three years of exposure to the vices and sins of cosmopolitan London have hardened his outlook. No longer the naive son of the Kirk we met in his adventure with the Devil of Euston Square, Lawless is still hard-working and dogged, mingling bafflement with sympathy, but has added an air of cynicism.

Nicknamed The Watchman for his former trade – his colleagues and superiors use his expertise for free – Lawless has been out of favour since his clash with the revolutionary Berwick Skelton and views his new assignment as an Inspector of Vice with some reluctance.

Charged with preparing evidence for a hypocritical and typically Victorian parliamentary inquiry into the city’s vice trade, he is plunged into a shadowy netherworld of frayed glamour and double standards, mesmerising and unspeakable by turns.

From the pornographic booksellers to the back alleys of Haymarket, he discovers the cast-offs and casualties of the society bordellos. He becomes fascinated by a musician, Felix Sonnabend, who has established a foundation for fallen women, but his inquiries draw the attention of powerful men, who will go to any lengths to defend their reputations.

A chess automaton, an impossible theft, a ruthless newspaper baron and a company of street urchins, actors and vagabonds all feature as Lawless presses on with what appears a thankless task.

William Sutton is a master of the oratorical Victorian style and this exceptionally well-constructed and atmospheric story is a worthwhile addition to the Victorian mystery fiction genre. His research is impeccable and his weaving of real characters into the tale enhance its credibility and authenticity. The wild writer Wilkie Collins, social commentators Henry Mayhew and Dr William Acton and the immortal Charles Dickens all have parts to play. Kate Hamilton was a notorious brothel madam and the beautiful, tempestuous and outspoken ‘Skittles’ the most famous courtesan of the age.

Crowds gathered to watch Catherine Walters, a brilliant horsewoman, drive her carriage at breakneck speed through the parks. Her lovers included ‘Bertie’, Prince of Wales, later King Edward VII, Napoléon III of France and Spencer Cavendish, Marquess of Hartington, later eighth Duke of Devonshire. Society women scrambled to follow her fashions. Artists queued to paint her portrait. Her discretion and loyalty were a by-word and she retired a wealthy society woman owning property in Mayfair and elsewhere, including two hotels, one in France

That was the top end of the market. At the other end, young girls were literally bought from their parents in the provinces or abroad and ‘broken in’ to their trade in often brutal vice ‘schools’. The brightest, best and most beautiful went to upmarket establishments like Kate Hamilton’s. The rest worked the streets with all the attendant dangers. Life for most was short.

Sutton’s vision of Victorian England is intriguingly bleak, dark and realistic. He describes how the hypocritical rich exploit the poor while publicly deploring their way of life and how ‘fallen women’ may lose their children and end up dead and discarded on the streets. Life is harsh and unforgiving for those who struggle.

He uses his characters to point up his social criticism and excels at creating a dark atmosphere. His depictions of depravity and prostitution are nuanced – although hardly for those of a delicate disposition – but he approaches difficult themes in a realistic way. There's something deliciously sinful and raw about some of his depictions that fascinates me.

This novel will also appeal to fans of the dark fantasy/Gothic horror school because of its strong sense and fearless depiction of Victorian life and times. It’s fearless, it’s surprisingly simple, achingly raw and unendingly sinful. Sutton’s use of quotes from Charles Baudelaire’s Les Fleurs du Mal (The Flowers of Evil) adds a touch of class as well as signposting the way through the tale.

If the multi-talented Sutton – writer, classics teacher, futurologist, playwright, actor, musician, cricketer for Brazil(!), driver for ‘Mad’ Frankie Fraser, ice cream parlour singer, tutor to the Sugababes, can maintain this standard of invention and mastery of linguistic tone, he will soon not have time for anything else except Lawless! I look forward to the next instalment later this year.