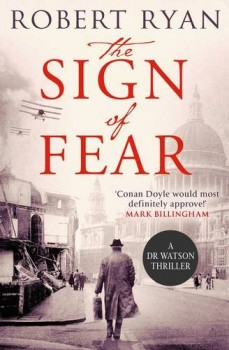 As London cowers under German aerial bombardment, Doctor John Watson must solve the kidnap of leading government officials and the mystery of a lost ambulance ship.

Prolific Scouser Robert Ryan is by far and away the best of the wave of Sherlock Holmes imitators now flooding the library shelves. The former Sunday Times journalist writes with skill, ingenuity, intelligence and compassion to produce a cast of characters and well-researched and eminently compelling stories which Conan Doyle himself would have been proud to own. This fourth in the series, featuring Holmes’ companion and amanuensis Dr John Watson, is no exception.

Set in autumn 1917, London is not the city that Watson and Holmes knew. Terror comes from the sky in the shape of German Zeppelins and bombers and Londoners are forced to hide underground. The war on the western front is again at a stalemate. Thousands of men are dying in the mud of northern France as the opposing armies slug it out for gains of a few hundred yards. Back in England war provides endless opportunities for criminals and Fenian terrorists as a police force denuded of officers, struggles to keep a lid on things.

Watson, an Afghan war veteran, is back in uniform as a RAMC major. After the shocking ending of his adventure in A Study in Murder, he is trying to rebuild his life after losing yet another person special to him; the death of his friend and companion, the courageous VAD nurse Mrs Gregson at the hand of the ruthless female German spy. When his friend from his time at a frontline hospital, Staff Nurse Jennings, fails to return from France and it appears she was on an ambulance ship sunk in the Channel, Watson is determined to find out what happened to her.

Then his concert-going friend Sir Gilbert Hastings is kidnapped, along with other members of the War Injuries Compensation Board, and it appears the entire British state is under threat.

Ryan piles intrigue on intrigue and the reader will find it difficult to work out where this breakneck story is going next. The wartime atmosphere is brilliantly conjured up as the story races along, with tension building to a surprising and shattering ending.  While part of the denouement is fairly well signposted, it is still quite shocking.

Darker than Watson’s earlier adventures, this is a tale of loss. Loss of soldiers and civilians in war and the loss of decency and humanity by those in power. But throughout the many layers of plot and sub-plot, far too many to attempt to explain here, Ryan maintains both the momentum and still manages to inject an amazing amount of compassion and humanity for both sides in the brutal conflict.

This is a superb book, so good that Holmes’ rare and brief appearances – his angina brought on by a life of drug abuse and physical deprivation – hardly disrupt its riveting flow. Watson, for so long the reliable prop and butt of much of Holmes’ sarcasm, has truly come into his own. This traditional and traditionalist English gentleman, old-fashioned in almost every respect, devoted to his duty, but never losing his humanity, deserves better than to be left dangling at the end of this episode .... but then how would Ryan start the next tale?