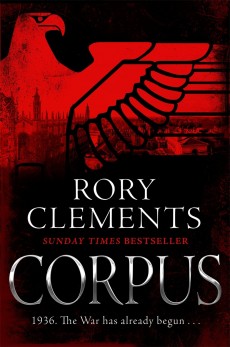 Rory Clements, a former associate editor of Today and writer with the Daily Mail and Evening Standard, built his reputation with a series of brilliant and bloody Elizabethan espionage thrillers including the John Shakespeare series featuring the Bard’s spy elder brother.

Despite moving his setting forward 400 years, he cannot quite sever his connection to those great spymasters Walsingham and Cecil, whose dedication and ruthlessness helped save Britain from religiously-inspired Spanish expansionism. His new hero, Cambridge lecturer, American-born Tom Wilde, a specialist in Elizabethan espionage history, faces similar problems.

But now the year is 1936. Russia and Nazi Germany back opposing sides in the brutal Spanish civil war. Both have their reasons for wanting to influence the future of the British monarchy – particularly in a politically polarised country, where there is a background of mistrust and simmering class violence.

Britain faces a constitutional crisis, with the weak and pro-German Edward VIII vacillating between his love for the American divorcee Wallis Simpson and his duty. The government is divided, prime minister Stanley Baldwin determined to force an abdication and replace him with Edward’s brother Albert, Duke of York, and others, like Winston Churchill, advocating the King should be allowed to marry.

This split over king or country, fascism or communism, was reflected no more than in the febrile academic atmosphere of Cambridge University, where the infamous Apostles, an exclusive and prestigious society based at Trinity and King’s Colleges, produced Russian spies Philby, Maclean, Burgess and Blunt, and others such as Cairncross, Liddell and the American Whitney Straight, all suspected of being members of the same espionage ring. Wilde is thrust into this hothouse of intrigue by his friendship with his attractive neighbour Lydia, whose left-leaning former Girton College friend is found dead, from a supposed drugs overdose.

When a wealthy right-wing landowner and his wife, connected to her family, are found murdered in their bed, events begin to spiral out of control, culminating in a gun battle in Windsor Great Park.

Clements’ clever, atmospheric, fast-paced and immaculately researched novel is both pacy and assured with an intriguing protagonist, intricate plot and historical context. Rich in deception and intrigue, this tangled web of espionage and murder is a real rollercoaster, equally appealing to fans of historical ‘faction’ or of spy fiction and thrillers.

Wilde is a likable and engaging hero and his associate, the British intelligence operative Philip Eaton, a suitably intriguing and ambivalent character, entirely in keeping with the convoluted plot and setting. As too is Harold Dill, the communist senior academic acting as recruiter for the Russians, a character closely based on Arnold Deutsch, who first involved the Apostles and devised their ‘cover’ of  apparent total commitment to the establishment.

One minor complaint! How a senior officer of the SS Liebstandarte, Hitler’s personal bodyguard, could possibly fail to kill someone after shooting them in the back of the head at close range takes a certain suspension of belief, but it is the only weak point in what is otherwise a standout historical spy thriller by a fine journalist and writer who can turn his hand to any historical period and brings the urgency of a news story to the frame of the novel.

The next story in the series is to be set three years later during the final build-up to war. It will be well worth waiting for