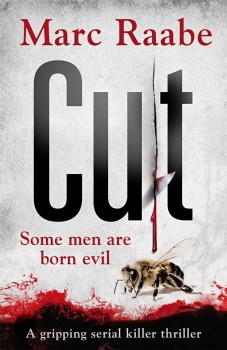 Gabriel’s pregnant girlfriend is abducted. To find her and the serial killer he is forced to face the horrific past he’s been running away from for nearly three decades.

An 11-year-old boy witnessed a horrendous crime which has damaged his life beyond belief. His parents were murdered, his house burnt to the ground. Several foster homes and many rages later his devastated younger brother David eventually became estranged, and Gabriel Naumann spent years locked in a psychiatric hospital, undergoing various therapies, including electric shocks. He remembers very little, other than saving David from the burning house. Yet fear of cellars, memory of a watching some film and the childhood obsession with Luke, the Star Wars hero, remained.

Nearly three decades later Gabriel is mostly alone and works for the security company Python in Berlin, run by an enigmatic Russian called Yuri Sarkov. He equally loves and hates his job but at least he can concentrate on the present, rather than the horrifying past, and can always rely on his boss who had become his legal guardian after rescuing him from the psychiatric hospital.

During a late night shift an alarm is activated following a break-in at old mansion in a posh suburb. Yuri specifically asks his colleague Cogan to go and do the checks but Gabriel goes instead. When he arrives he’s shocked to discover that the building has been abandoned for years, yet the alarm keeps going off. At the property he finds that the living-room safe has been opened and emptied. But what really terrifies him is a brand new couture dress, with an attached note, hanging in the basement.

The bizarre sight triggers painful feelings and as he’s just about to finish the job, he receives a call from his pregnant girlfriend Liz Anders, a TV journalist. She has been badly beaten in a park. Gabriel alerts the police but when he arrives at the scene Liz is gone, and he’s being accused of murdering a young man lying there in her place.
The detectives get hold of confidential treatment files, the old psychiatrist mocks Gabriel, his depressed brother is on the verge of losing his TV career and not interested in helping, and no one believes that Liz is his girlfriend. Without any clues as to the disappearance and no help from the authorities, Gabriel is thrown into the frantic race against time when a stranger contacts him. The ghost from the past wants him to remember what had happened at that fateful night as he plans to kill Liz. Very elaborately. And to destroy Gabriel’s life completely.

The chilling and disturbing Cut was a bestseller in Germany. The English translation by Sharmila Cohen carries the mood perfectly. Although chasing the serial killer is not a new subject, here the terrifying character, calculating, methodical, and extremely cruel, is really not for the faint-hearted – and simply unforgettable. Also, other characters are well portrayed, and what’s important, believable. Although I cannot stomach the graphic descriptions of torture, I am impressed by the surprising plot, full of twists; a strong female who simply refuses to the next victim; and the interesting aspects of dealing with the painful memories and how they are being repressed.