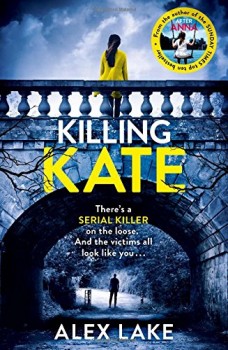 Kate is away on holiday when the first woman is killed. But the second victim is too close for comfort, in every way.

Kate Armstrong needs her post-break-up girly holiday to get away from her ex, Phil, who just won’t let go. But waking up in a stranger’s bed with a massive hangover and no memory of the night before is pushing even her boundaries of being young, free and single. She must get out of his apartment and back to her friends, who have been texting her half the night, worried sick.

Phil Flanagan doesn’t care about his job, right now. His mind is overloaded with thoughts of Kate, and he is swinging between anger and denial, made worse by reaching for the bottle. When Kate returns, he can’t stop himself from stalking her.

But worse things are happening in the village. Someone is raping and strangling young women. Women who resemble Kate. Is it coincidence? Or is Kate, convinced she is being watched, the next victim? And what is Phil’s involvement? Has the loss of Kate turned him into a serial killer?

I make no apologies; I devour serial killer novels. The psychology and suspense fascinate me. So I was looking forward to jumping in to Killing Kate. The first few chapters felt a little clumsy, and distanced with its third person point of view. But with chapters alternating between Kate and Phil, I ploughed on, believing the psychology of two people in the early stages of a break-up would add a further dimension to the story, whether Phil turned out to be the killer or not. Unfortunately, the foreshadowing was so heavy-handed I had worked out who the serial killer was, and his ‘motivation’, before the police had even decided there was a serial killer.

From the start, pace-slowing backstory and mundane detail clog the plot. Worse still, they turn Kate into a dislikeable, self-absorbed lush, who, despite her protestations, is chomping at the bit for a new relationship. Phil, though deliberately in his case, is portrayed equally badly. This left me not caring for the main characters enough to cheer them on.

My suspension of disbelief received a few knocks with what felt like a distinct lack of research into serial killers. Furthermore, the writing was lazy, in places unedited, except for the ‘interludes’, which were sharp and brief by comparison.

However, the best faux pas was just around the corner. Pantomime time. I am sure most of us enjoyed pantomime. As children. And as children, hyperactively inattentive thanks to the sweets we’d consumed during the performance, we probably needed the reveal along with its idiots’ guide explanation by the narrator in the corner. But please; we do not need pantomime-poop in a crime novel. We certainly don’t need chapter after chapter of the criminal giving his detailed life-story, where he reveals every step, thought and motivation behind his crimes. I started to believe he was in danger of messing up his modus operandi by boring his last victim to death. Neither do we then need reminding of all that reveal, yet again, with the ‘hero’ guessing the criminal’s motivations; he could still be a hero whilst getting some of the facts wrong. That might have made the story a little more believable.

Finally, the plot had more conveniences than Glastonbury festival, which left the ending all too easy.

If Kate and Phil’s actions had not been so overdone, their behaviour could have been believable; most of us have been through a break-up at some time, and know what they are suffering. If the reader had been granted a little intelligence, and the reveal kept minimal, Killing Kate would have been a good story. For readers who enjoy a whodunit without having to tax their brains, this is an explicit, easy read, dangling its toes in the dark waters of serial killings.