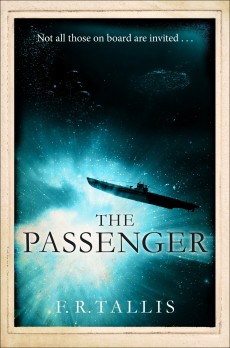 It is 1941 and the Battle of the Atlantic is at its height. U-Boat U330 receives a heavily encoded message to pick up two prisoners from a ship just off the coast of Iceland. They carry out the order and, in doing so, put the submarine in grave danger.

The German U-boat U330 is on patrol in the North Atlantic when it receives a coded message instructing it to pick up two prisoners from a vessel located off the coast of Iceland. They are a Lieutenant Commander Sutherland, a British submariner, and Bjornar Grimstad, a Norwegian academic. Kapitanleutnant Siegfried Lorenz, the commander of the U330, is anxious to know the reason for the mission but the SS man who hands them over refuses to give any details and tells him that the orders come from someone very close to Hitler and must be obeyed without question.

The prisoners are taken aboard but it is not long before something occurs that will change the whole nature of the patrol. One of the problems with the book is that it is difficult to believe that the circumstances could exist that would allow the incident to take place at all.

Although comparisons have been made with two other books – The Shining by Stephen King and Das Boot by Lothar-Günther Buchheim – it has to be said that the content brings it much closer to the latter. The representation of life on board a submarine during the Battle of the Atlantic is detailed and very convincing.

The food is at best monotonous and at worst almost inedible. The washing and toilet facilities are inadequate and the whole boat stinks of unwashed bodies. There is always the chance that a technical fault is going to put the crew in danger, particularly when the boat is submerged. The captain and crew need to be constantly alert, particularly in response to the challenge of the speedy British destroyers and corvettes. Even badly directed depth charges can be powerful enough to put a submarine out of action. Descriptions of encounters with allied convoys are breathtaking, particularly when the submarine is sunk and is saved only because it happens to settle on an undersea cliff, allowing the crew time to make the necessary repairs.

Compared with the excitement generated by the wartime action, the supernatural element is almost a distraction. It becomes obvious that there is an extra ‘passenger’ on board – one who has no right to be there. Initially, Lorenz is puzzled by the number of things that go wrong. The dive chambers don’t work properly, one of the engines breaks loose, the batteries leak and the torpedoes either won’t launch of fail to explode on contact. He begins to sense and then to see another presence – something that is confirmed when other members of the crew also report similar sightings.

On the whole, however, these scenes lack drama, particularly since it is not explained why they should be occurring at all. This is more than compensated for by the way in which the research that must have gone into the technicalities of submarine warfare is transferred effortlessly and seamlessly to the page. It is also rather strange that the author should have chosen to write from the point of view of a German submarine crew, but the stratagem is very effective. We begin to see them less as the enemy and more as victims of war who experienced the same horrors and hardships.