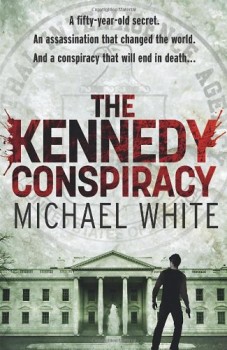 The Kennedy Conspiracy relates how a British journalist, Mark Bretton, was in a car following President John F Kennedy in the motorcade in Dallas when the president was assassinated. Shortly after the tragic events, Mark, or as different layers of truth and fiction mount up – and maybe his name was David – subsequently overhears something that puts his life and that of others close to him in grave danger.

What happens next proves to be both unexpected and thought-provoking. The story weaves in and out of the present time in a search for the truth behind the assassination. This is a novel based around a real-life context. It uses historical facts as a structure on which to hang a different story in which fiction and non-fiction are seamlessly interwoven and used to promote an unusual view of life and death. The prose is fluent and the plentiful dialogue is used very skilfully to bring the characters to life.

The pace and the plot hold up well throughout the book without faltering. In places the writing is fast-moving and there are plenty of vivid descriptions of action-packed events. Attempts to portray emotions such as fear, love, and anxiety, felt by the characters are generally successful and help to maintain the interest and involvement of the reader throughout the book.

Occasionally the play with time becomes confusing but the use of italics in places is helpful. The book raises interesting ideas relating to life and death and the author puts forward an alternative point of view and manages to make it quite believable. As such The Kennedy Conspiracy is an interesting read for more than just the crime fiction, although that in itself is enjoyable.

This is a unique and thought-provoking piece of writing that could certainly make a good subject for other media such as film. Prepare to be disturbed!