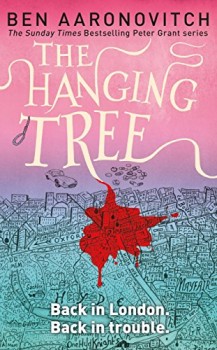 Life was always going to get complicated for Peter Grant when Lady Ty's teenage daughter is involved with a drug overdose at a party, but matters quickly become more complicated with the involvement of a magical book and the Faceless Man.

An impromptu and unauthorised party in a very expensive block of flats leads to a girl dying from a drug overdose. Lady Ty's daughter was at the party and her mother wants Peter Grant to keep her out of the investigation. Unfortunately the girl has other ideas and dumps a bag of trouble in his lap. While Peter is trying to sort this mess out, an old magical book surfaces with several parties taking an interest. One of them is the Faceless Man through his proxy, Lesley. So far so sensible, but why are they interfering in the drug death investigation?

It's a satisfactorily tangled web that Peter has to unwind. The plodding detective work is relieved by a few set-piece actions scenes. Peter is getting more and more competent at magic and in policing, which is nice to see. Also the non-magical parts of the Met are getting, if not more comfortable, more used to being around magic. Peter teams with Sahra Guleed from Seawoll's team.

There's a lot of people in this book. As well as the usual Met suspects, it seems that practically everyone from previous books shows up in at least a walk-on part in this one. This keeps the story moving forward, and it is nice to see old friends, but add in the new characters (some of them significant magical practitioners) and it all gets a bit out of hand towards the end. Certainly I felt that there were just too many participants in the showdown at the climax, which means that one section happens off-camera and a major player is sidelined by an out-of-character bit of action. Add this to the need to keep some of the continuing threads still ongoing the climax just felt unsatisfactory to me.

Having said all that, it is always a pleasure to spend time with the Folly crowd and there are enough thrills and jokes to keep up the high standard of this series of books.