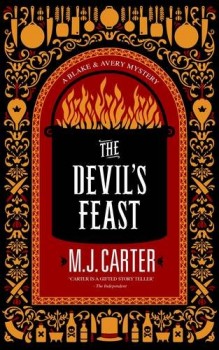 Here are the headlines: Afghanistan trying to get over another bloody war; the left of centre of British politics at odds, stabbing each other in the back while the threat of the Chartists – a working class party of often extremist reformers – looms; a state visit designed to stop the Middle East exploding into yet another war; and all the while in the background an expansionist Russia, stirring trouble wherever it can.

Garnish with a handful of temperamental celebrity chefs, all convinced of their own divine culinary brilliance, trying to outdo each other, and none too backward in promoting their own superiority, and you have the stock for a richly detailed and smartly plotted novel.

It is perhaps this familiarity with the background that makes this third adventure of the idiosyncratic detective pairing of the brave, but often naive, man of action and Afghan war hero Captain William Avery and the conflicted, multi-talented chameleon, which is the former intelligence operative Jeremiah Blake, such a good read.

The magnificent Reform Club is the pride of Pall Mall. Modelled on Rome’s Palazzo Farnese, its purpose is to weld opposition to the Tory government into a single unity. But feelings between the established Whigs and the newer Radicals run high in a web of rivalries and hatreds, both personal and political, which simmer behind the club’s handsome façade.

In its magnificent kitchens, reputedly the best in London, resident chef Alexis Soyer, the self-styled ‘Napoleon of food’, whose culinary brilliance is matched only by his talent for self-publicity, also faces problems as his staff battle each other for prominence and other well-known chefs resent his dominance.

When there is a mysterious and horrible death at London’s grandest gentleman’s club, its ruling committee is desperate to keep the matter quiet. Avery, in town from his Devon retreat on personal business and coincidentally visiting the Reform, is persuaded to investigate, but is distracted by the problems of, his mentor, friend and partner Blake, languishing in the foul Marshalsea debtors’ prison after falling out with his former boss, Theophilus Collinson, head of the East India Company’s Secret Department.

It soon becomes clear that this first death by poison was merely a dress rehearsal for a larger plot. And with Lord Palmerston due to host a diplomatic dinner for an Egyptian potentate which could affect peace in the whole Middle East, is there something far more sinister behind the killing?

MJ Carter’s surprisingly contemporary, beautifully detailed and smartly plotted story, peopled by real or reality-based characters, superbly captures the period atmosphere to paint a vivid portrait if 1840s London. From the poverty, filth and crime of its poorest streets, where children starve or sell themselves, to the magnificent and luxurious clubs where wealthy and aristocratic men, all in peacock finery, play the game of politics and gamble huge sums they do not possess, her background is never less than convincing.

But her near Dickensian righteous anger at Victorian hypocrisy, a lynchpin of the series, does not prevent her from revelling in it. Read this as social history and you will be surprised how little has changed. Read this as a tight detective drama and it more than holds its own with modern offerings.

Her strength is to combine the two. Her ability to summon up the inner sanctum of the Victorian male club, a debtors’ prison, or Soyer’s flamboyant dishes in elegant, sharply observant and occasionally genuinely witty prose makes this gripping, exciting and informative story totally enjoyable to read.